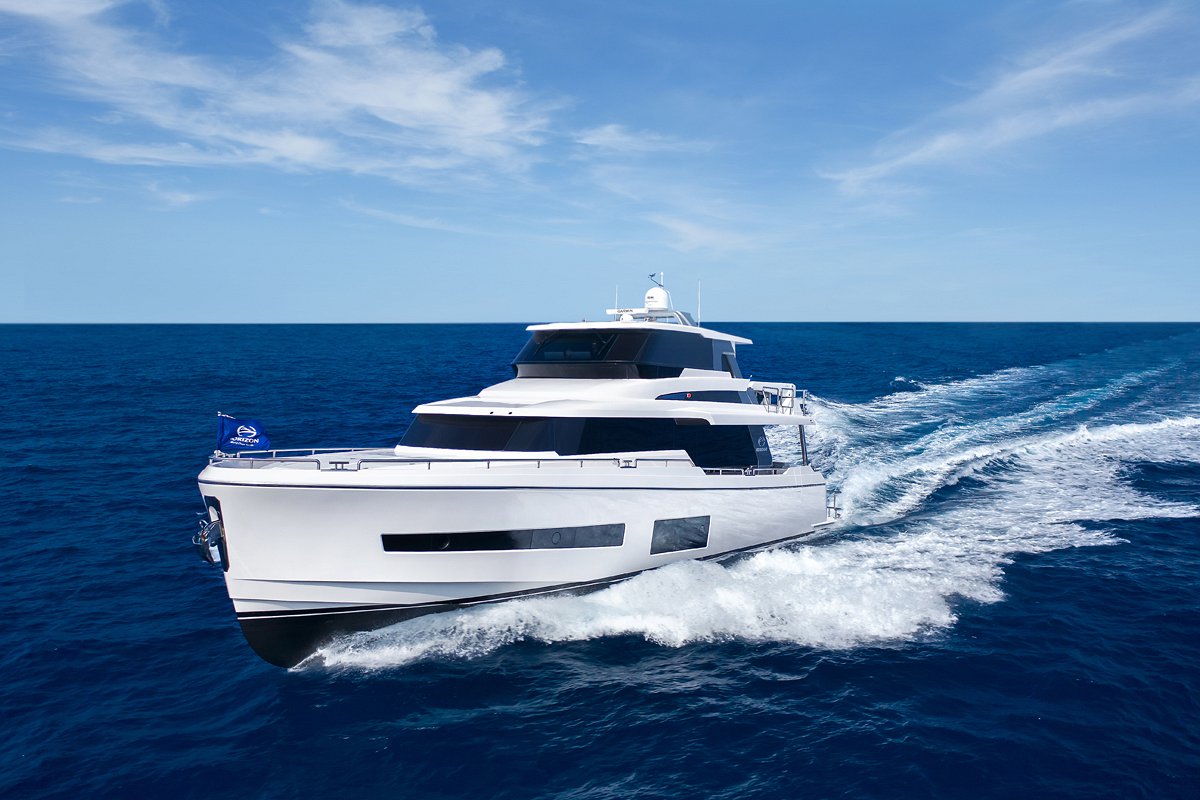 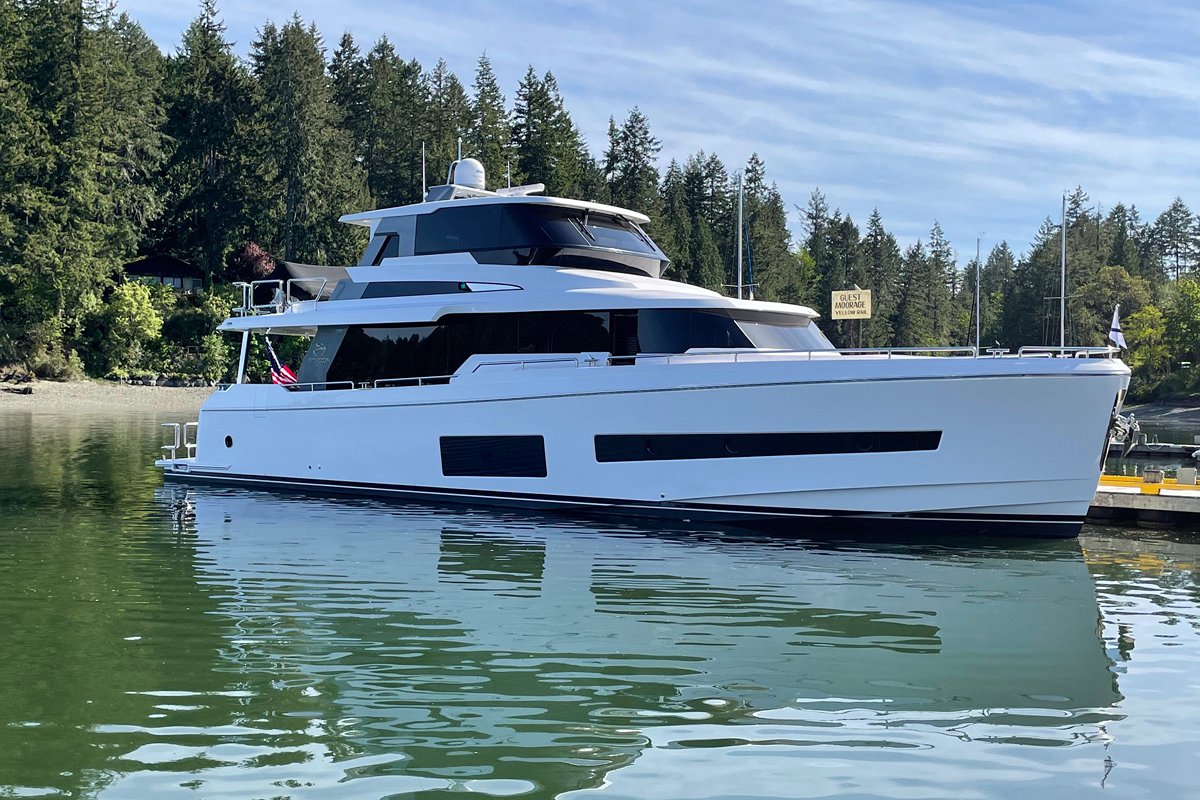 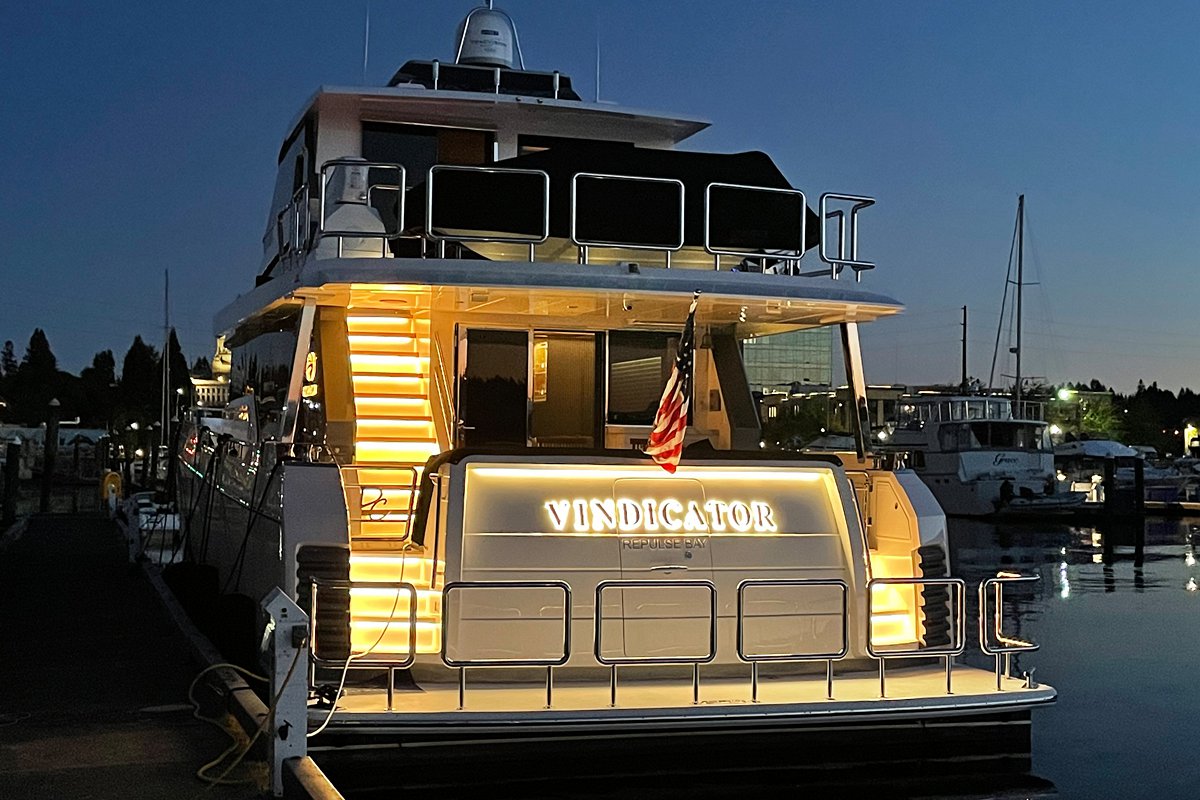 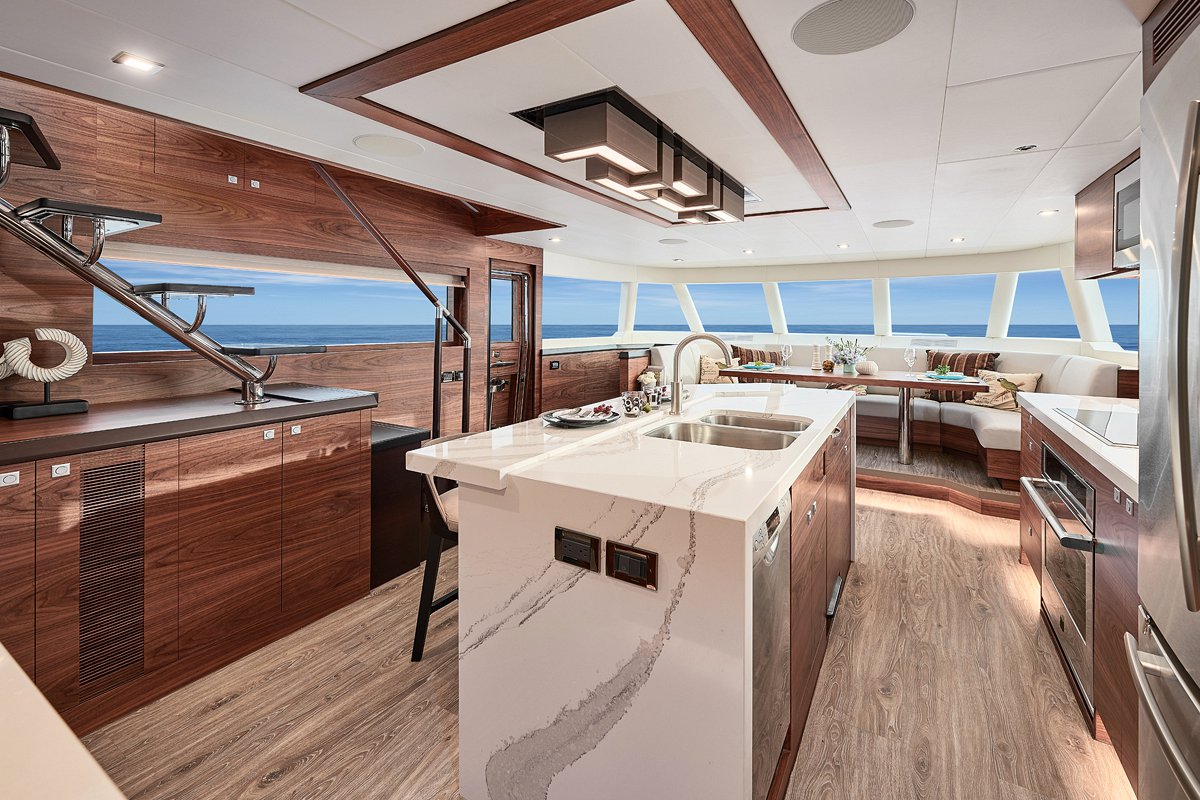 Dennis and Cathy Graham are the owners of the Horizon V68 Vindicator, the fourth hull of the Jonathan Quinn Barnett-designed V68 compact superyacht and the first to be built with an enclosed skylounge.

Dennis and Cathy Graham began boating in 1990, after selling one of their companies and finding some free time on their hands. Based in the boating paradise that is the Pacific Northwest, the Grahams solicited advice about their first boat purchase.

“We were told to buy ‘used’ because the boat would be ‘properly fitted and all the bugs would be worked out’,” recalls Dennis. “Wrong!” 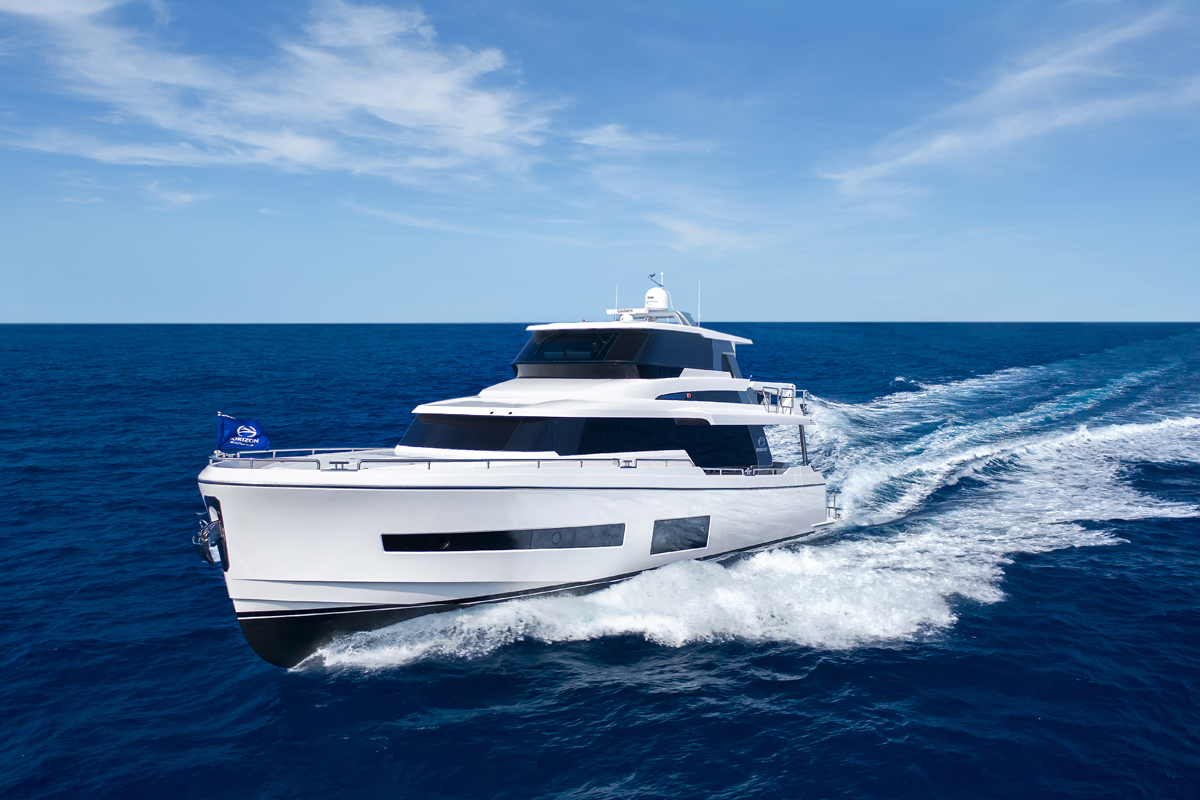 The Grahams’ first boat purchase was a 32ft 1989 Bayliner 3288, which was for sale in a boathouse in a marina.

“The first thing we learned was that the previous owner’s wife didn’t like boating so he just used it in the boathouse,” they recall. “The next thing we discovered was that he failed to pump out the holding tank!”

The Grahams’ first order of business to change the boat’s entire plumbing system, including the holding tank. “Being novices, we also discovered that she needed a VHF radio, radar, GPS… you name it!”

Still, the couple ran that boat every weekend and every holiday for several years. They even had a diesel heat system installed to handle the chilly Pacific Northwest weather. But soon, it was time to move on, and they sold the Bayliner.

They then moved up to a new 54ft OA and once again handled the design and pre-delivery in Kaohsiung.

Then came a 64ft OA and back to Taiwan they went. Finally, the couple moved up once again to a 72ft OA and did the space planning and visited the finished product in China.

But at the 2019 Seattle Boat Show, a new vessel would catch their attention as it made its debut. Penned by Seattle-based designer Jonathan Quinn Barnett, who counts among his accomplishments the design of the 414ft Octopus – the world’s largest private yacht at the time of her launch – the new Horizon V68 was purposefully created to comfortably accommodate a boating couple without crew within a space fitted with as many superyacht amenities as possible.

The Grahams were intrigued. “We liked the design and layout and also that it was designed by the marine architect whose office was two blocks from our condo in downtown Seattle!”

The couple turned to OA to inquire whether anything similar was pending in one of its yards. There wasn’t anything like the Horizon V68 on the boards at OA, so the couple decided to build a Horizon. 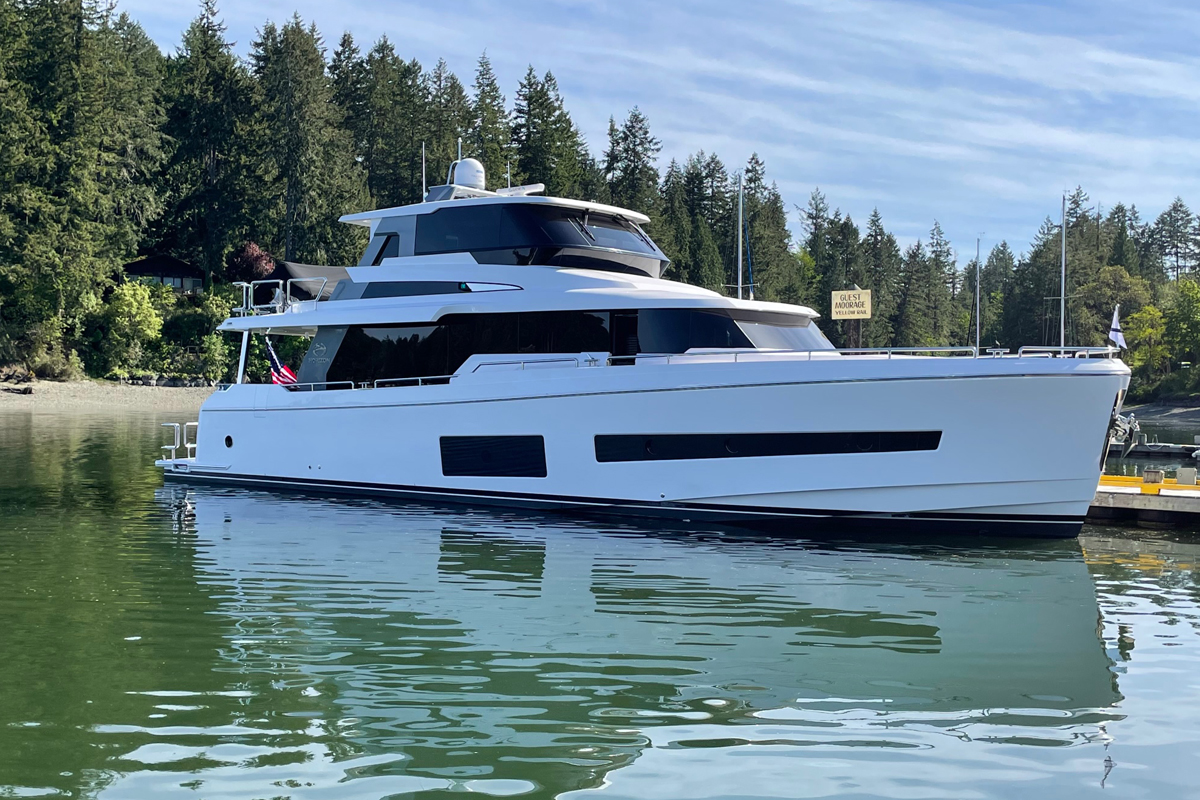 V is for Vindicator

The Grahams turned to their local Horizon dealer and agreed upon a price. Since the boat would be based in the Northwest and the Grahams were all-too-familiar with the weather conditions in the region, they requested a re-designed bow area and elected to enclose the bridge and use it as a second salon/office. “We also removed the ‘party area’ which would be covered by canvas 95% of the time the boat was out of the boathouse, anyway. 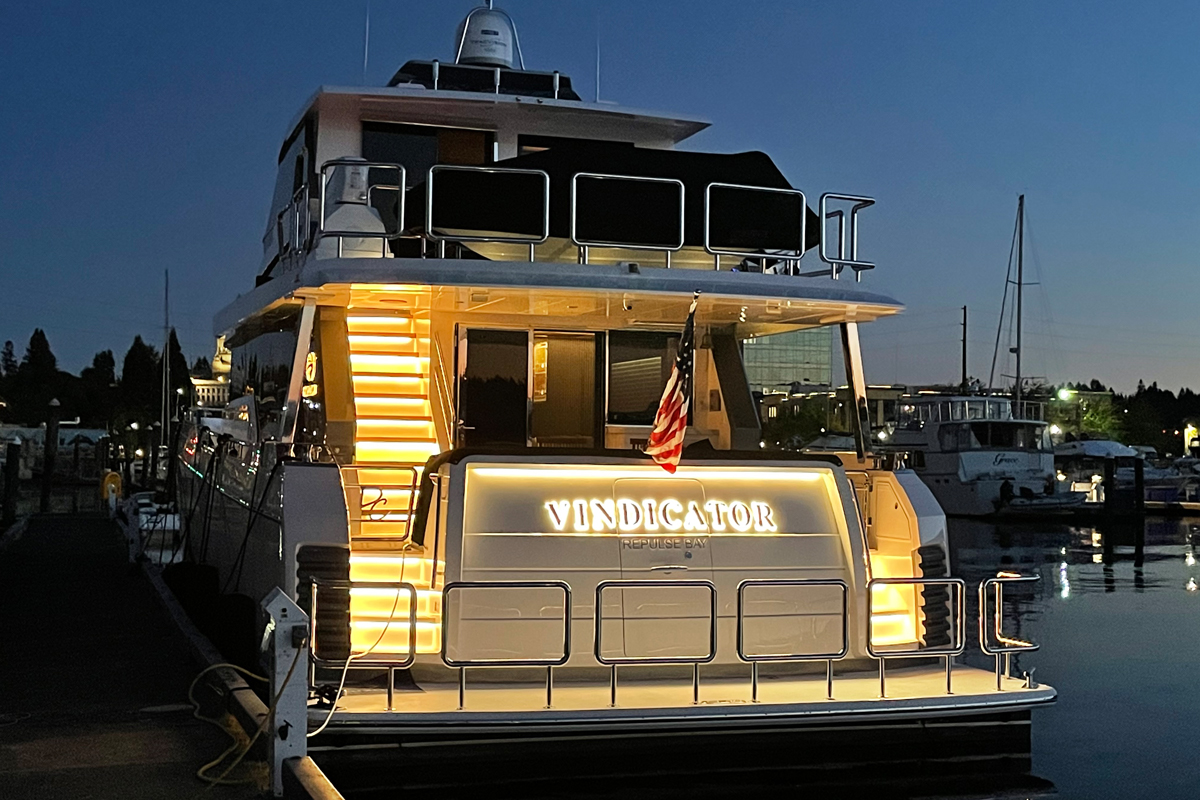 “Horizon designed a wonderful storage system that is huge,” says Dennis. “As you know, storage is a premium on boats. We removed the lower helm station and now can feed another dozen in that area. You must remember that this Horizon, the Vindicator, parties six, feeds four and sleeps two!” he laughs.

When the Grahams began working on their order for the Horizon V68, they requested direct communication with the yard as that had been their experience with Ocean Alexander.

“Somehow we discovered Vision shipyard president Austin Lin,” they recall. “We asked him if he knew the manager of the OA yard and he said yes, that he had hired him when he, Austin, worked at OA!

“We now believe that Austin worked on at least one of our OAs while he was working with that company, so from the beginning, we had a great feeling of trust. We were able to communicate with Austin and very resourceful staff on a daily basis – even to the point of cell phone calls if quick answers were needed.”

The Grahams had every intention of visiting the yard during the design and completion process, but the COVID-19 pandemic struck and no visits were allowed.

“Austin’s engineers, designers, and doers started sending us their suggestions for materials both soft and hard. We added and subtracted hundreds of things on the Vindicator through their suggestions or ours. All the while, we all worked together as a fine-tuned machine. Never once were we unhappy with anything the yard did.”

When the couple took delivery of their new yacht in 2021, they spent only eight days short of four months onboard. “This was pretty good, considering we could not travel into Canadian waters!”

This year, the couple plans to bring the Vindicator out of the boathouse in Tacoma in May and not return until mid-September. Happy cruising, Cathy and Dennis!