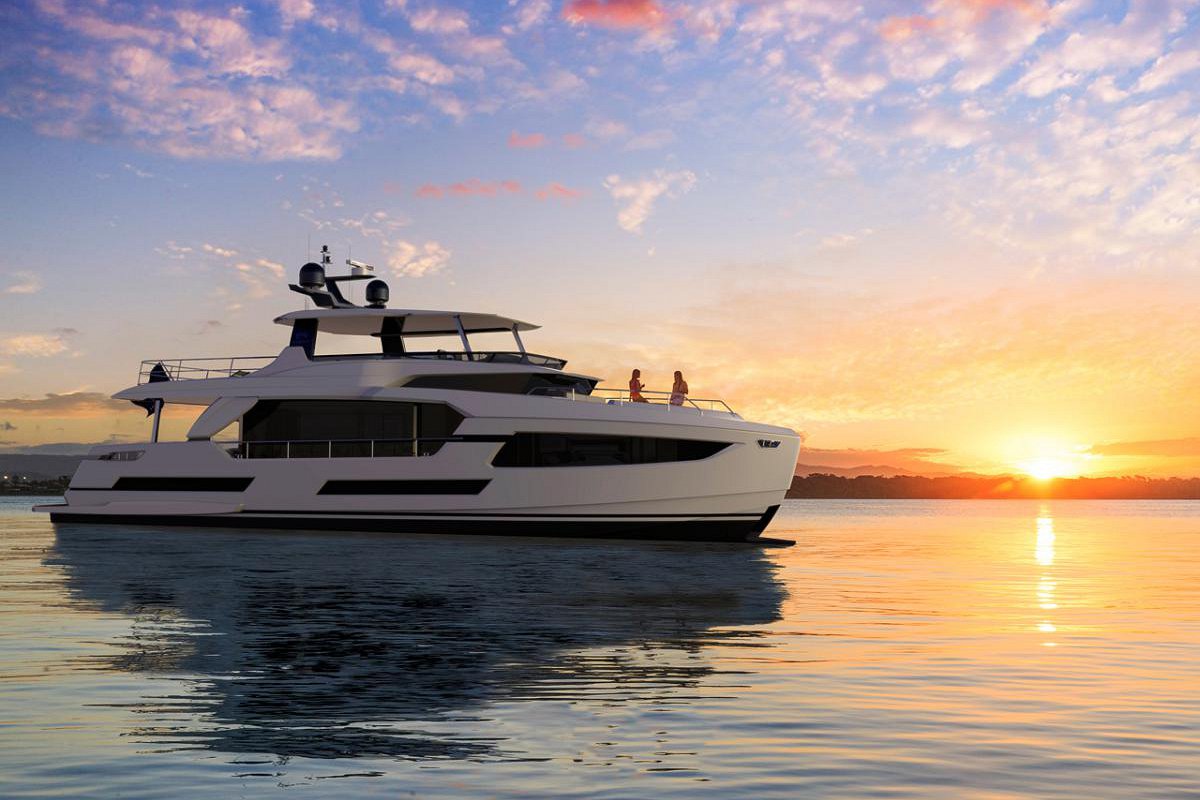 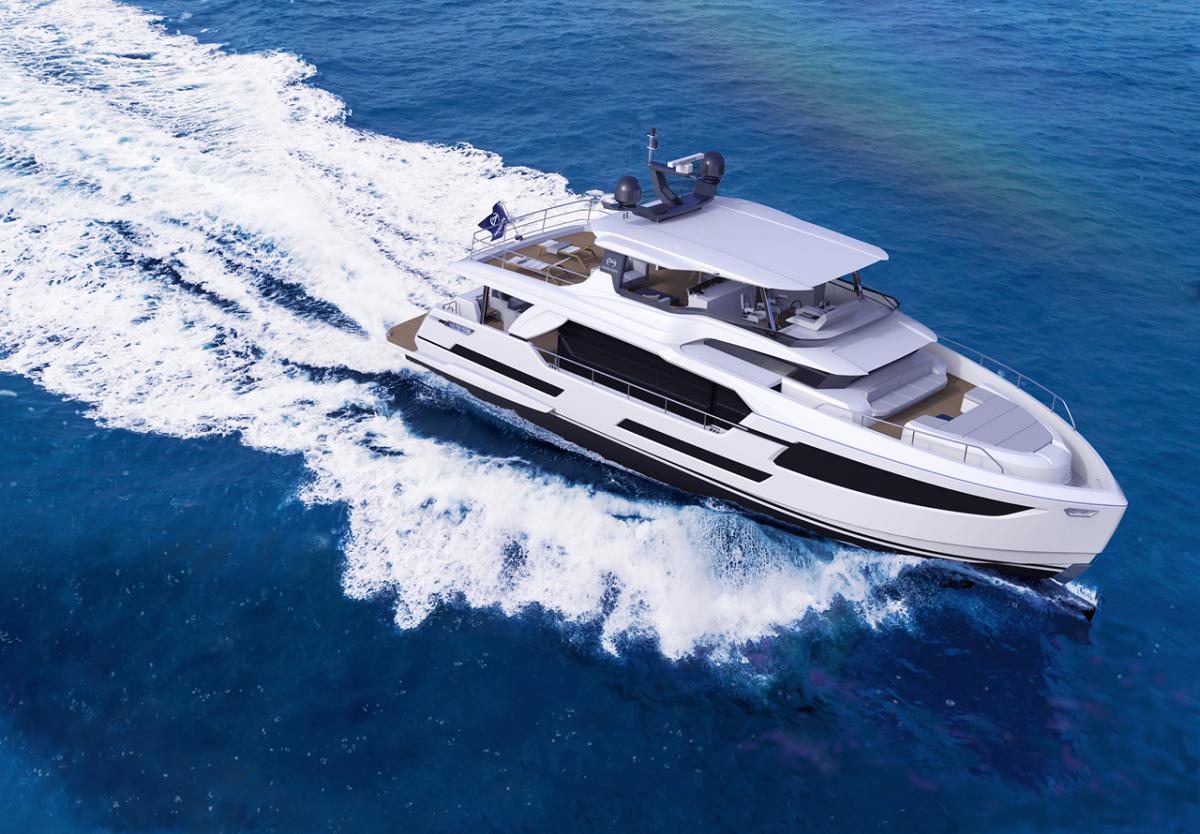 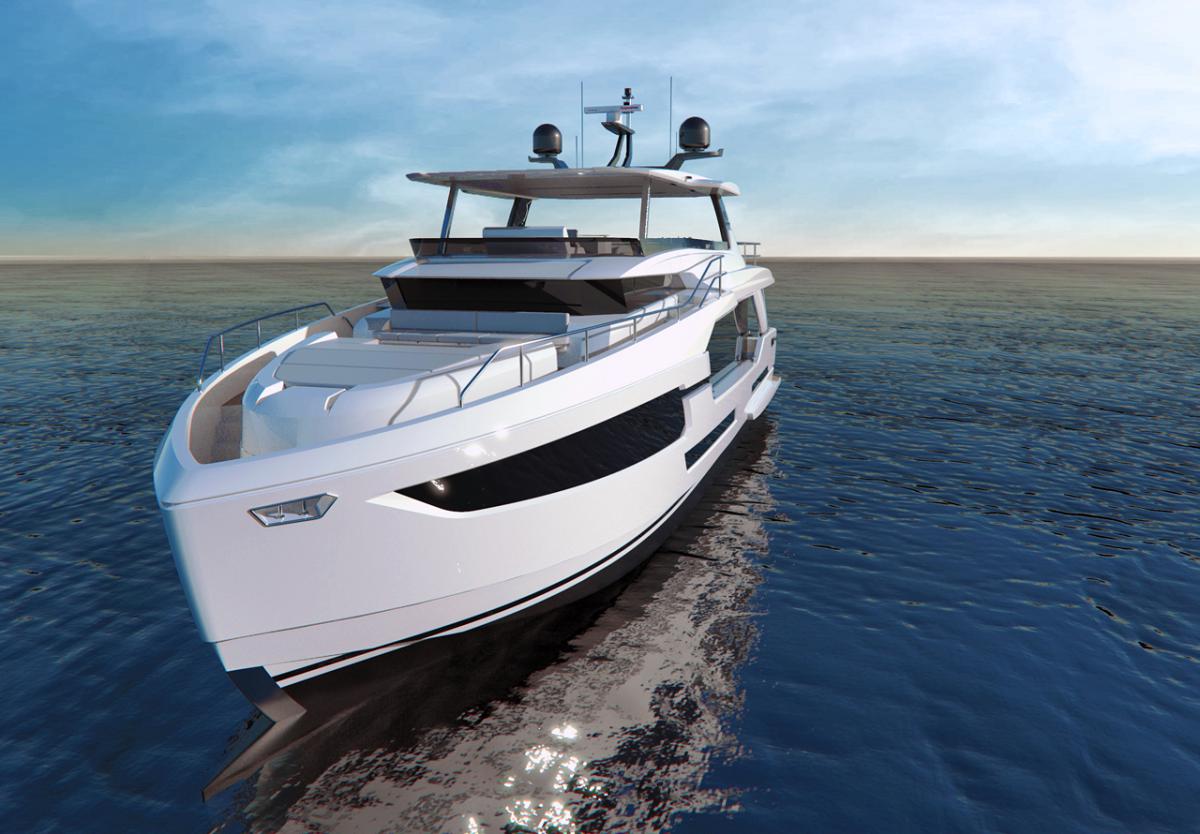 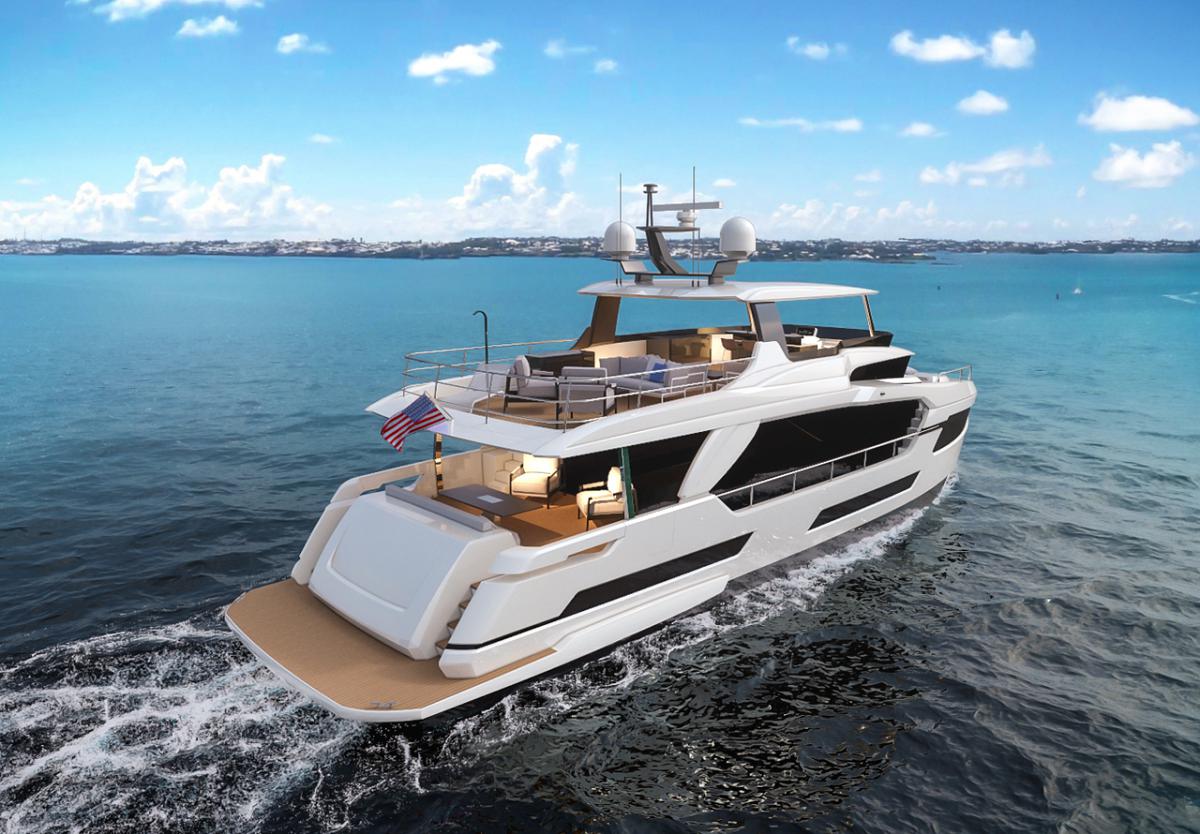 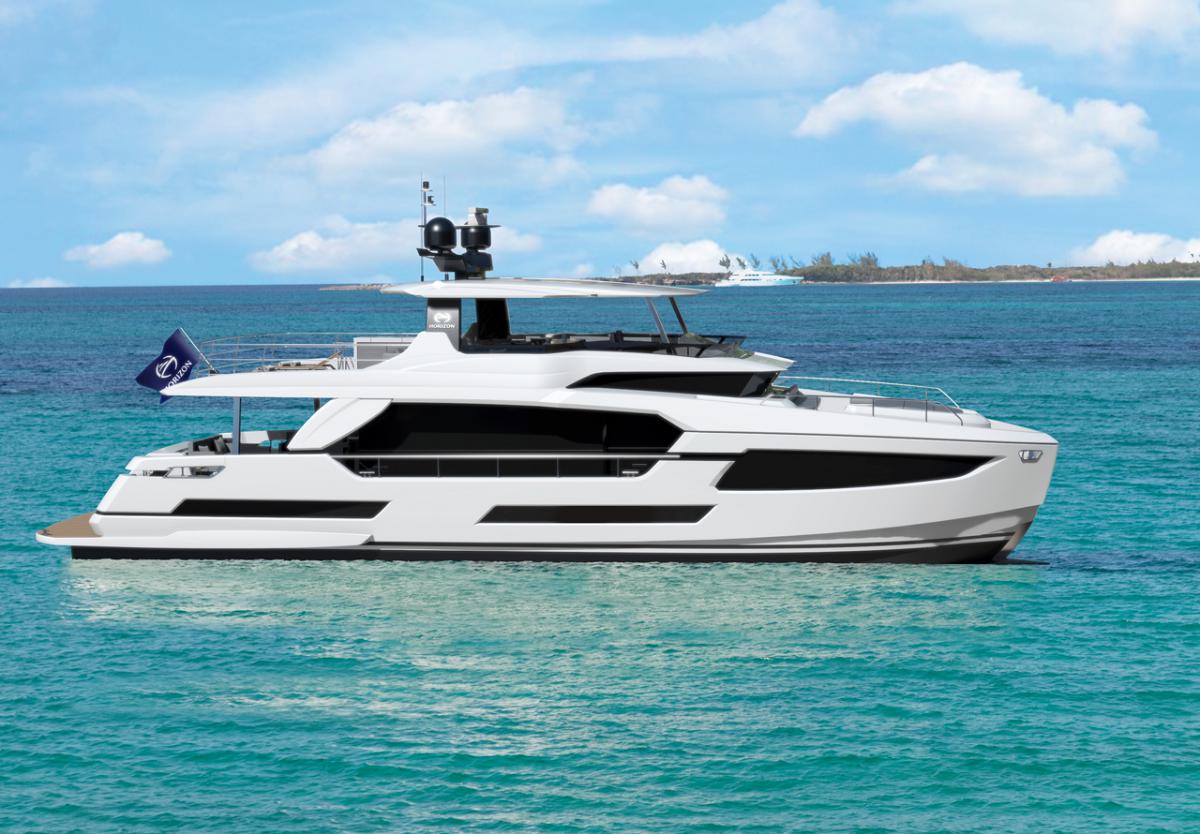 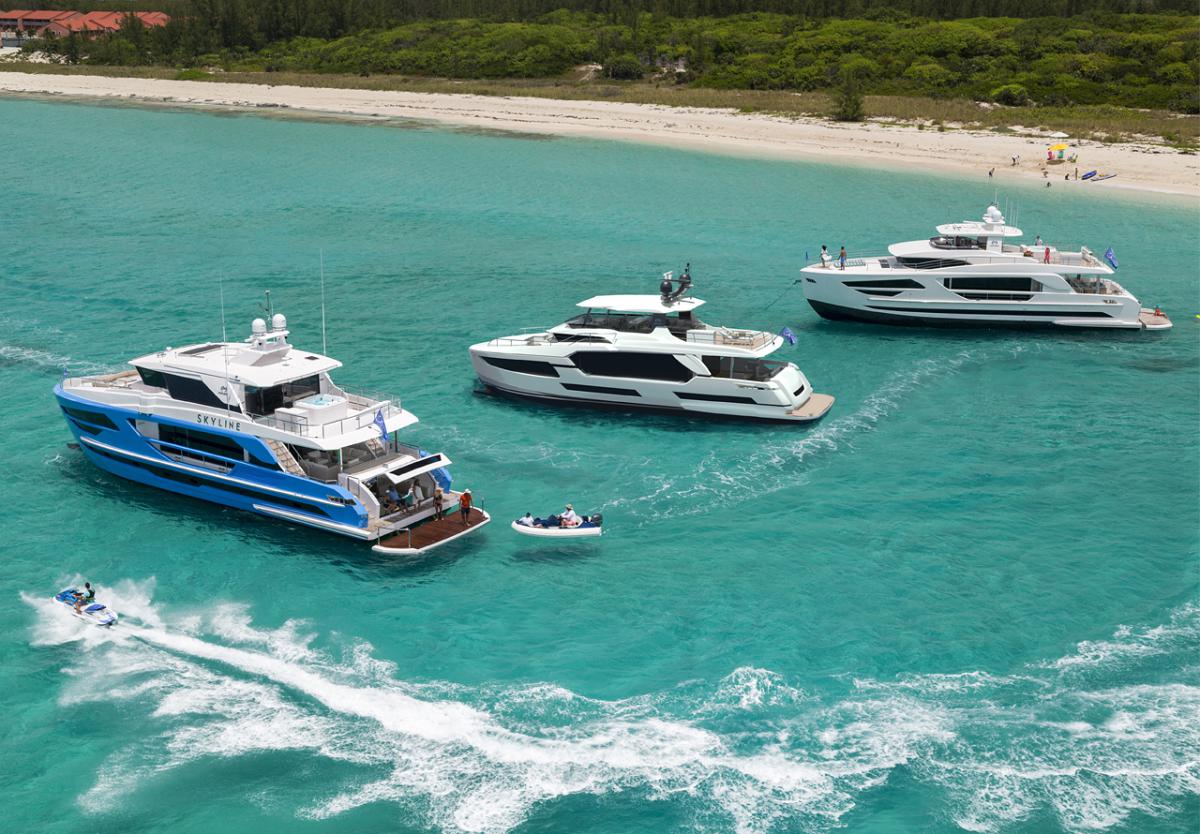 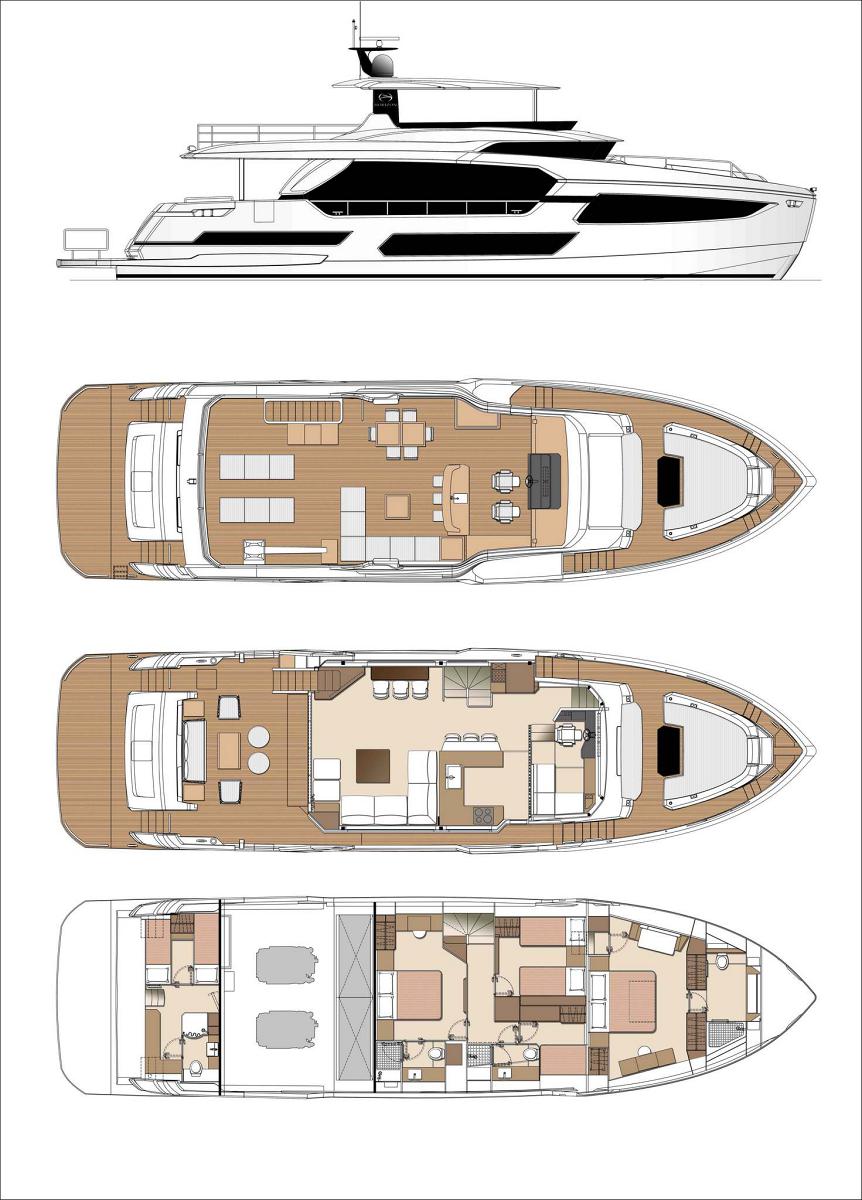 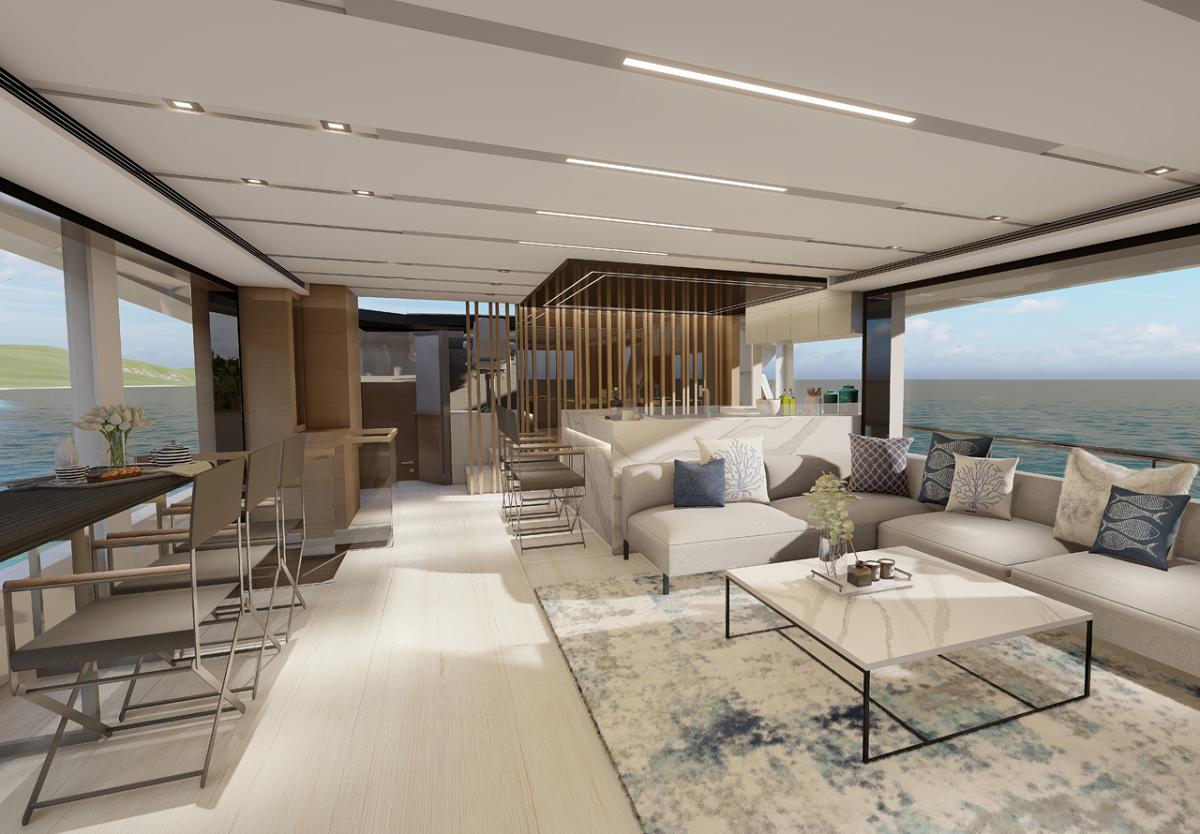 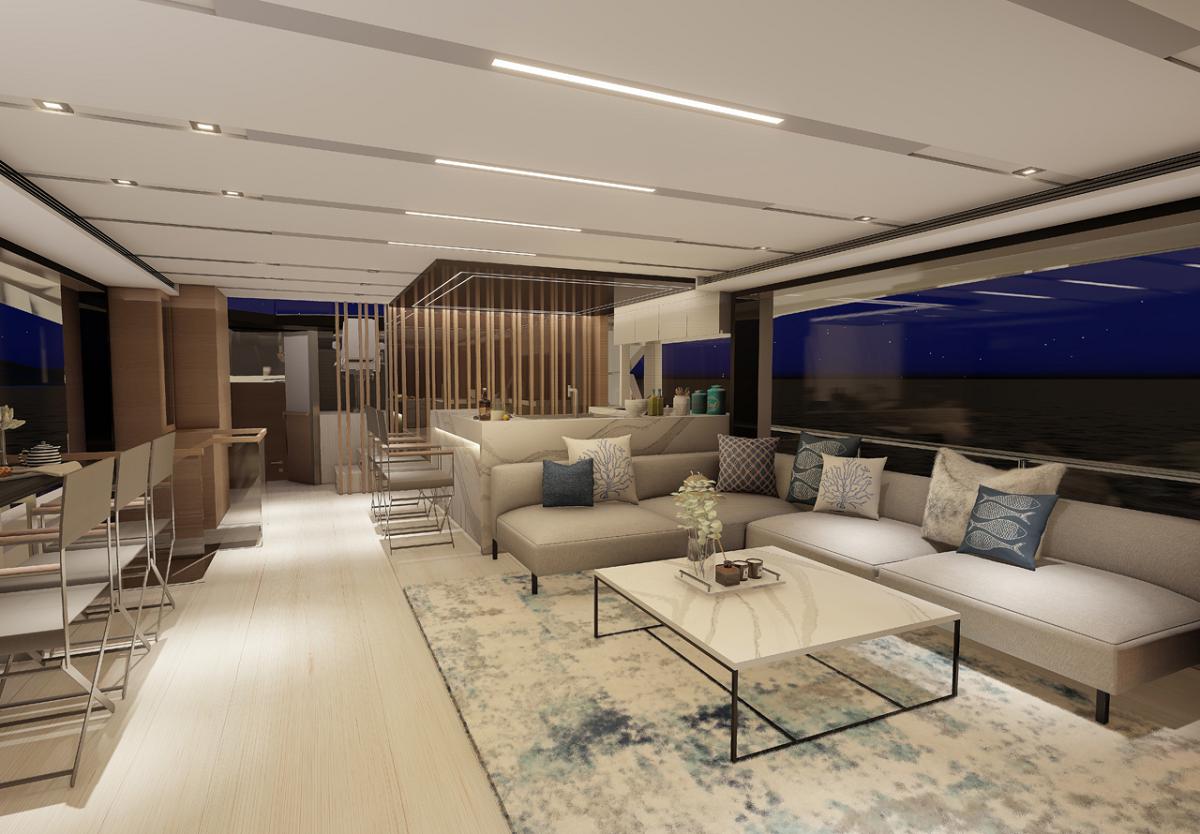 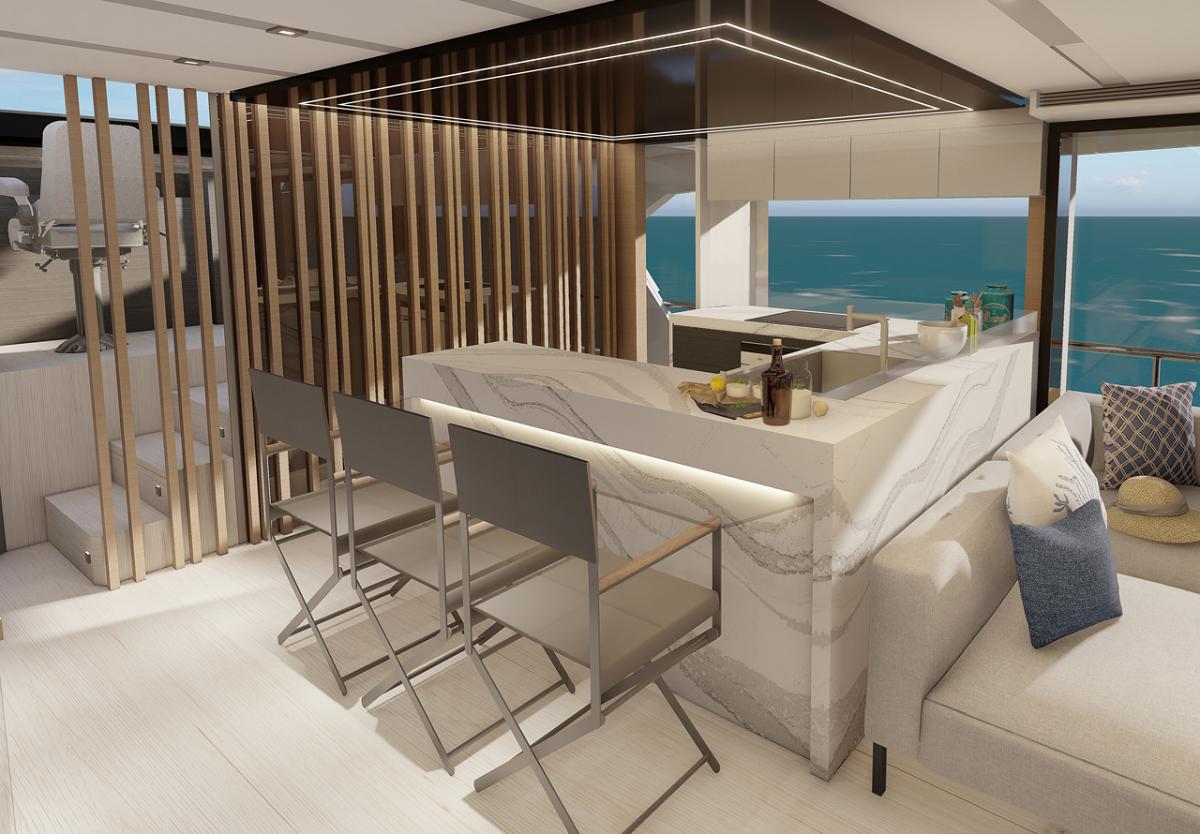 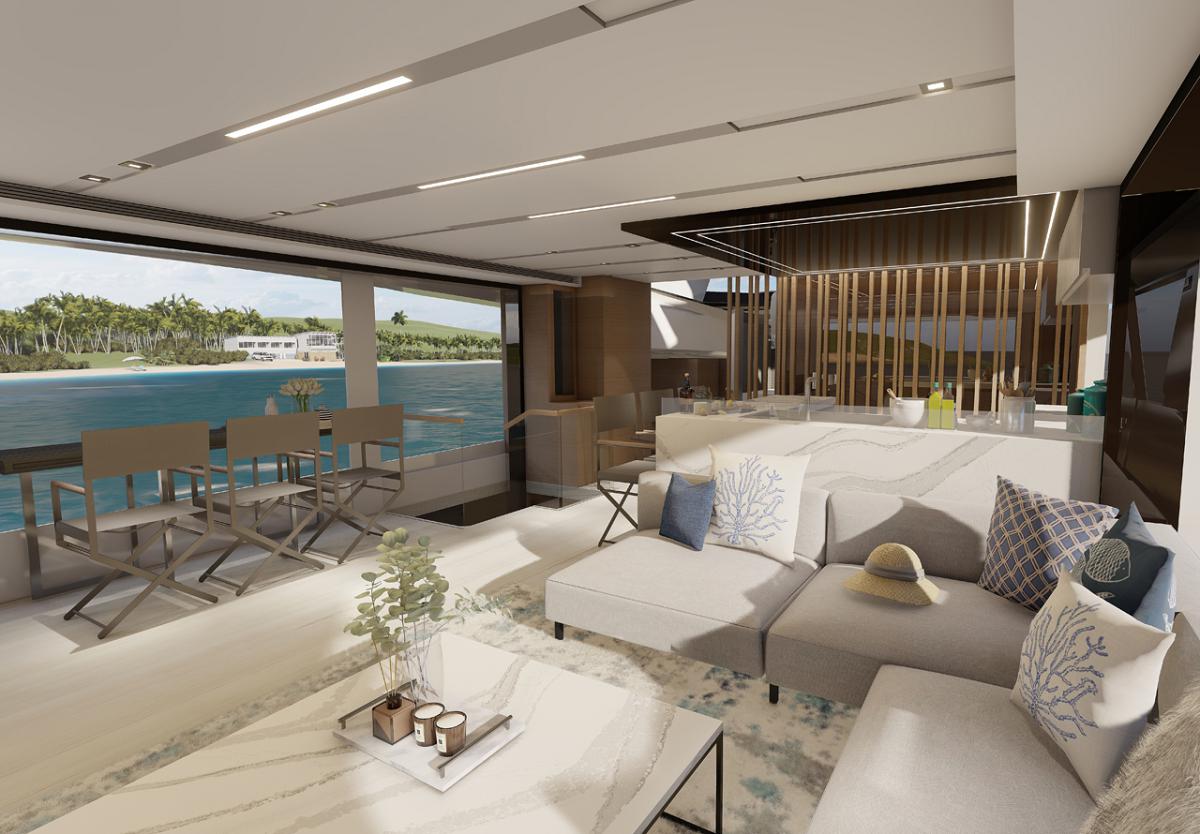 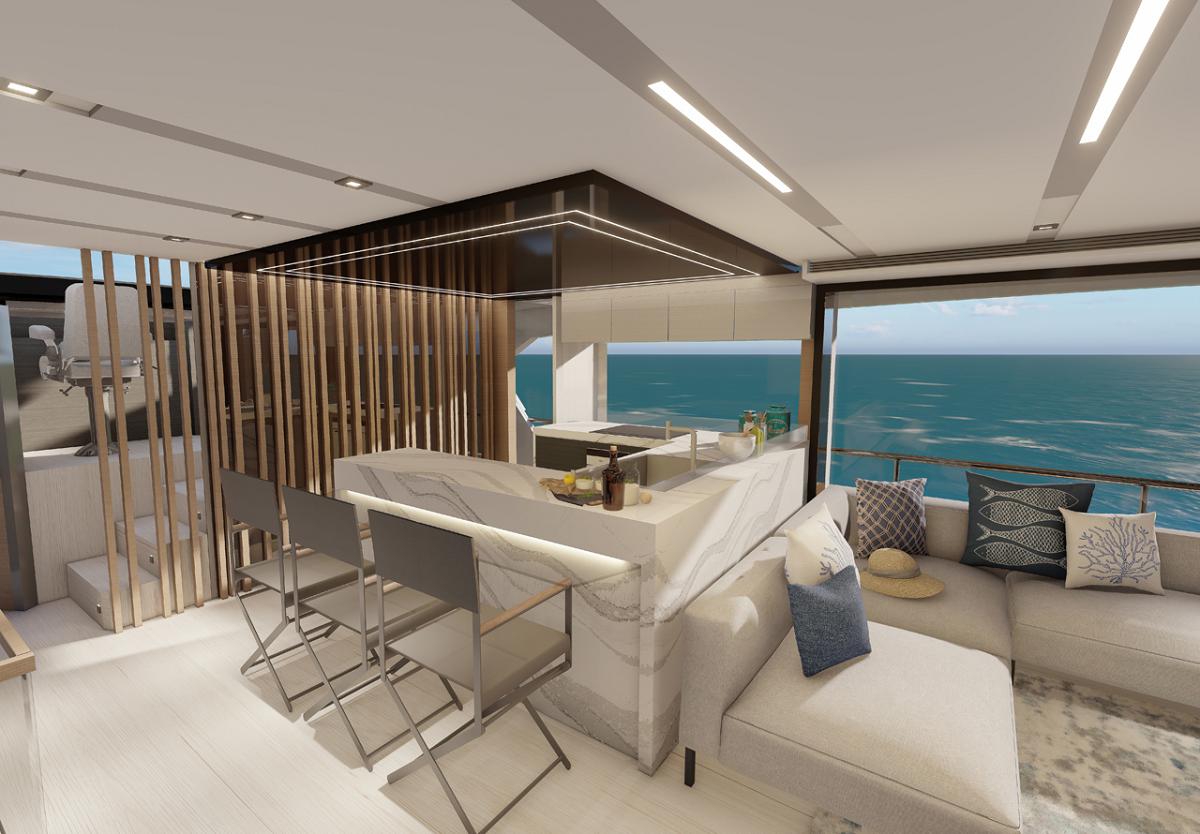 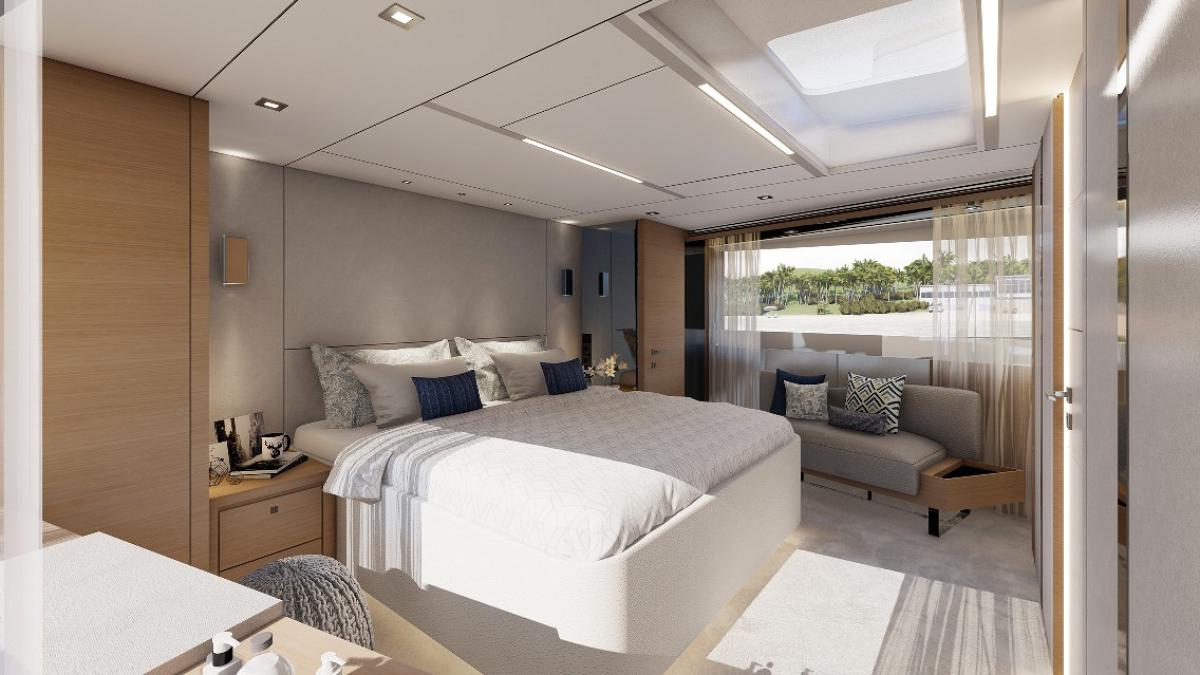 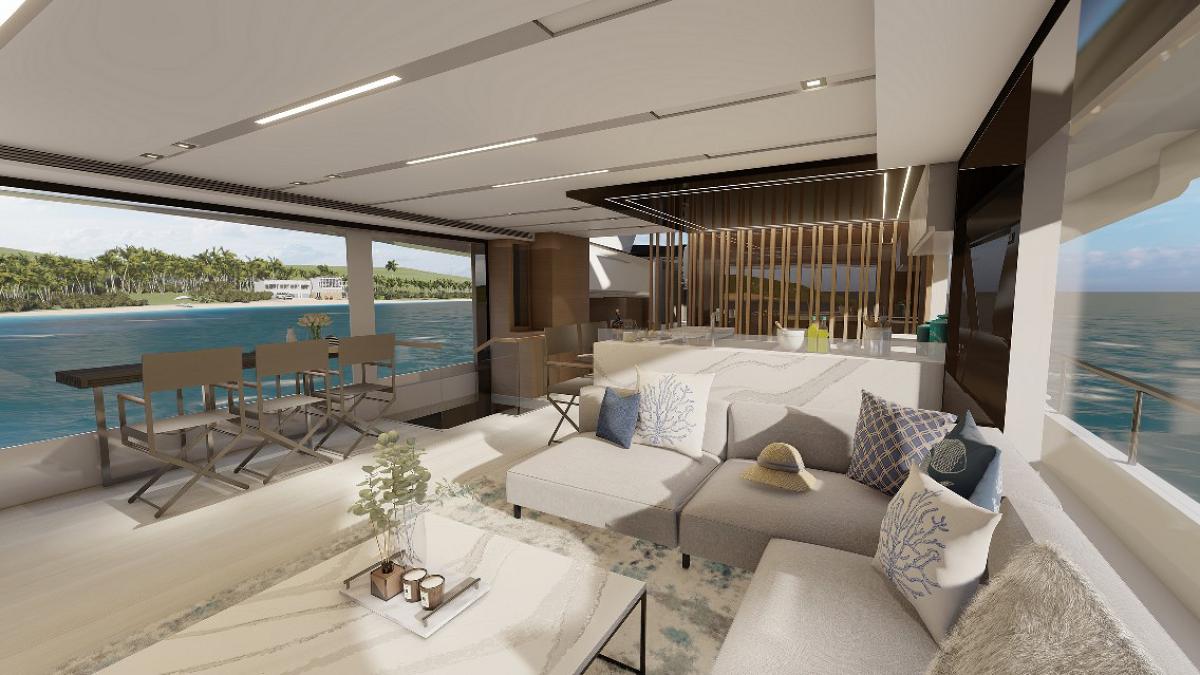 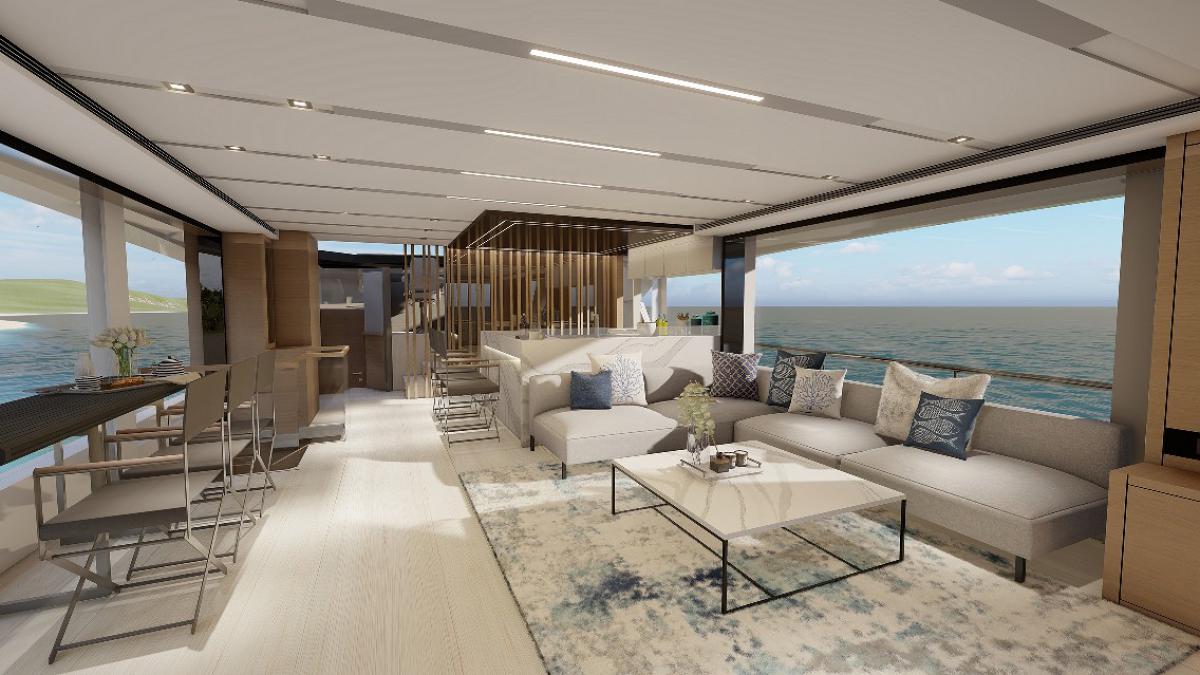 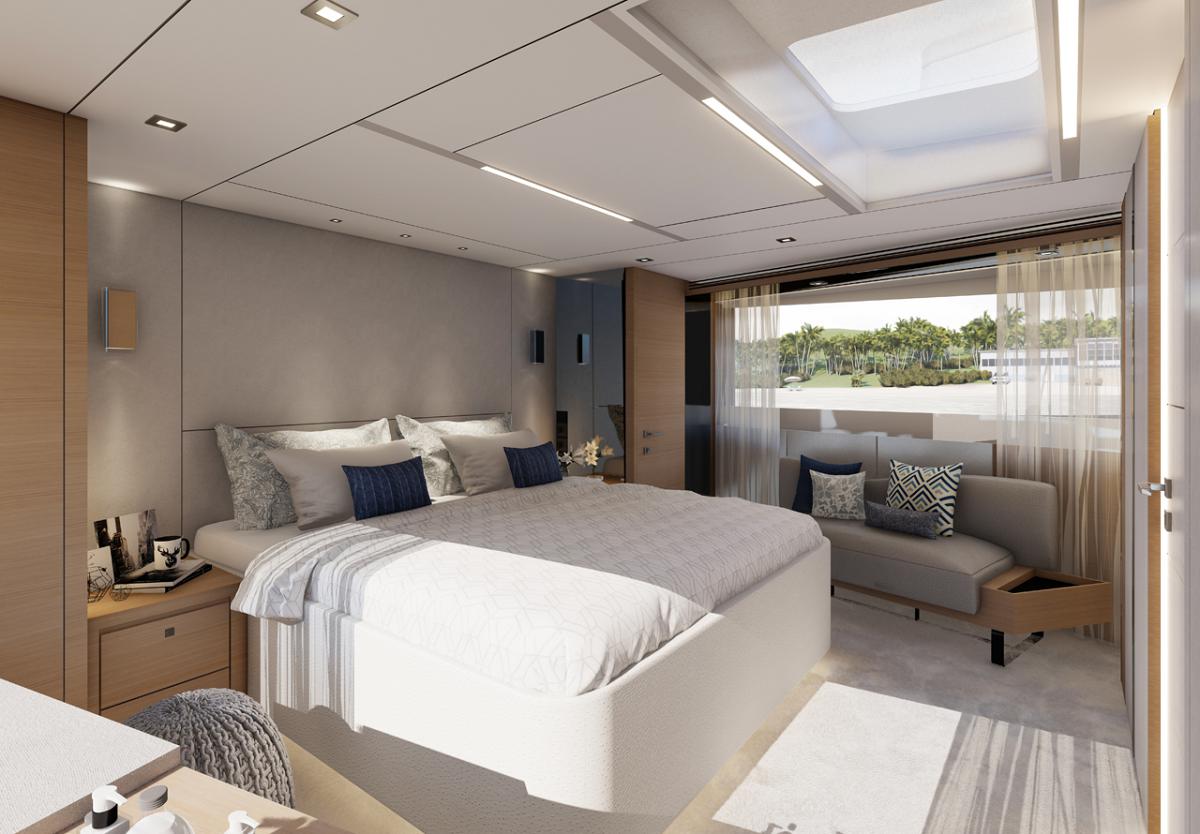 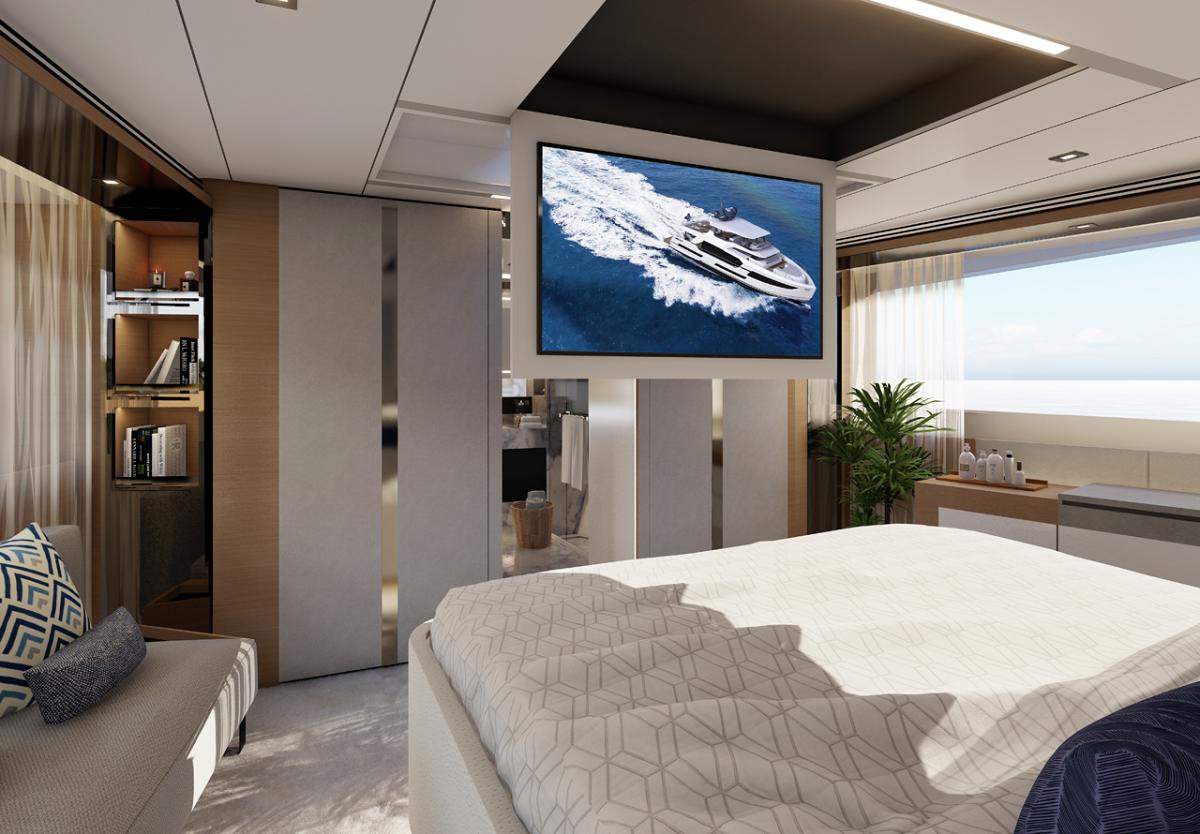 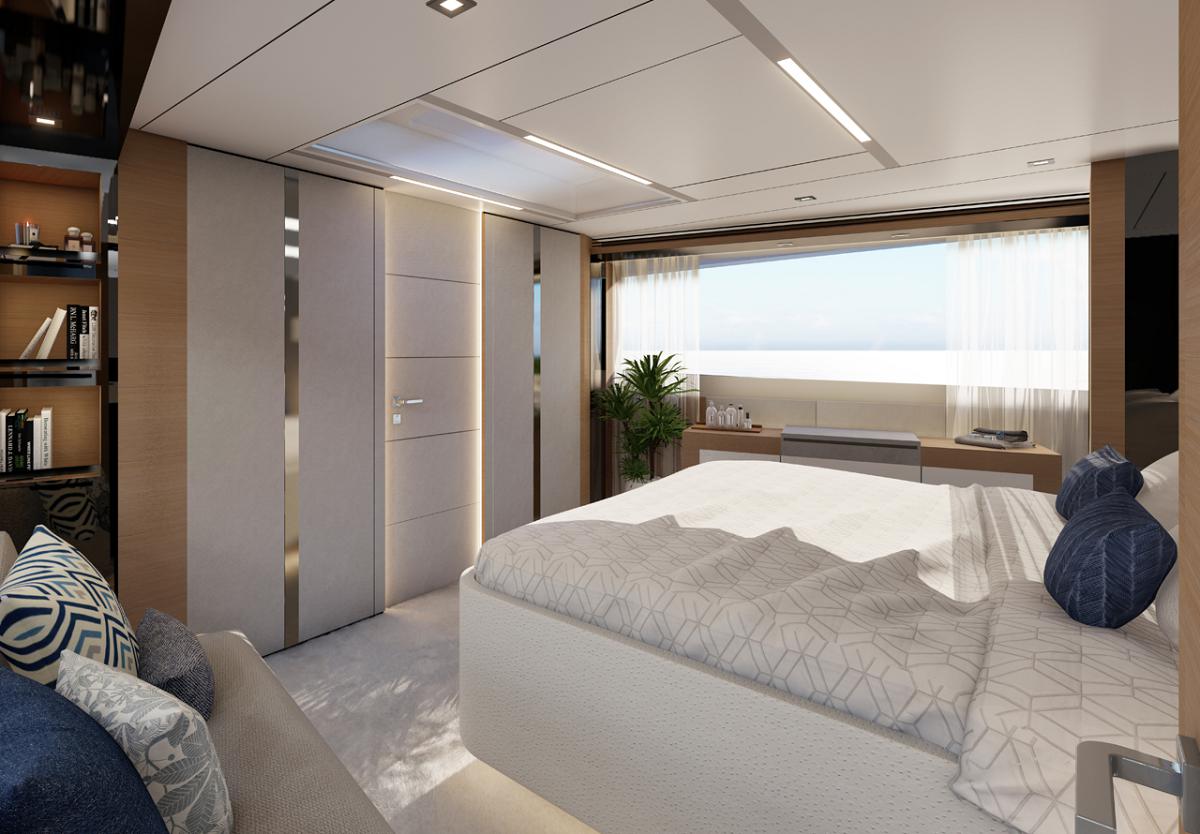 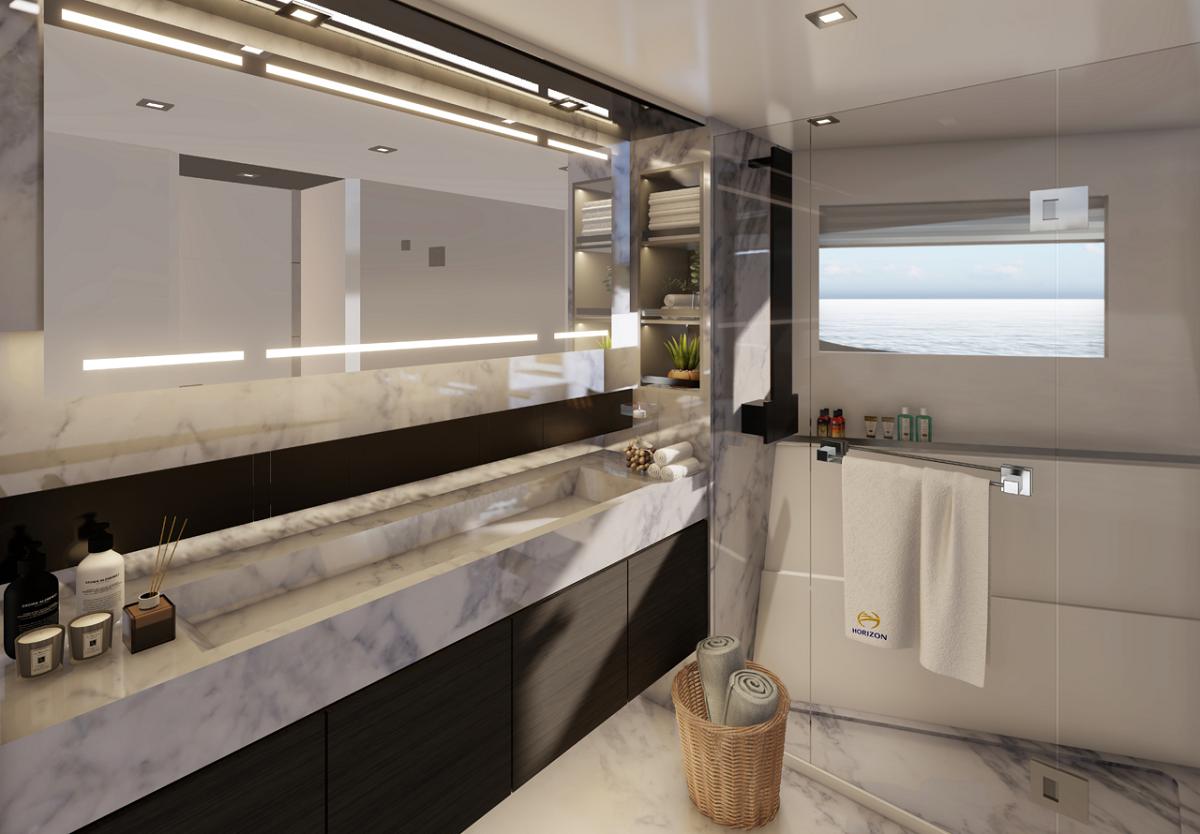 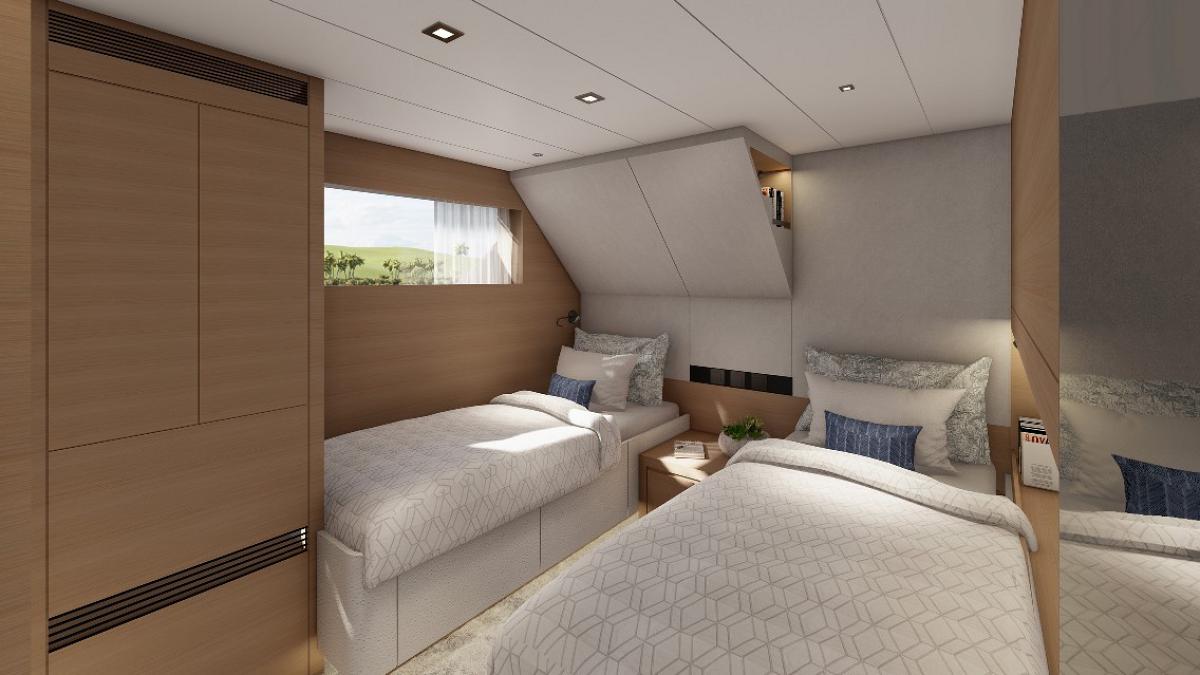 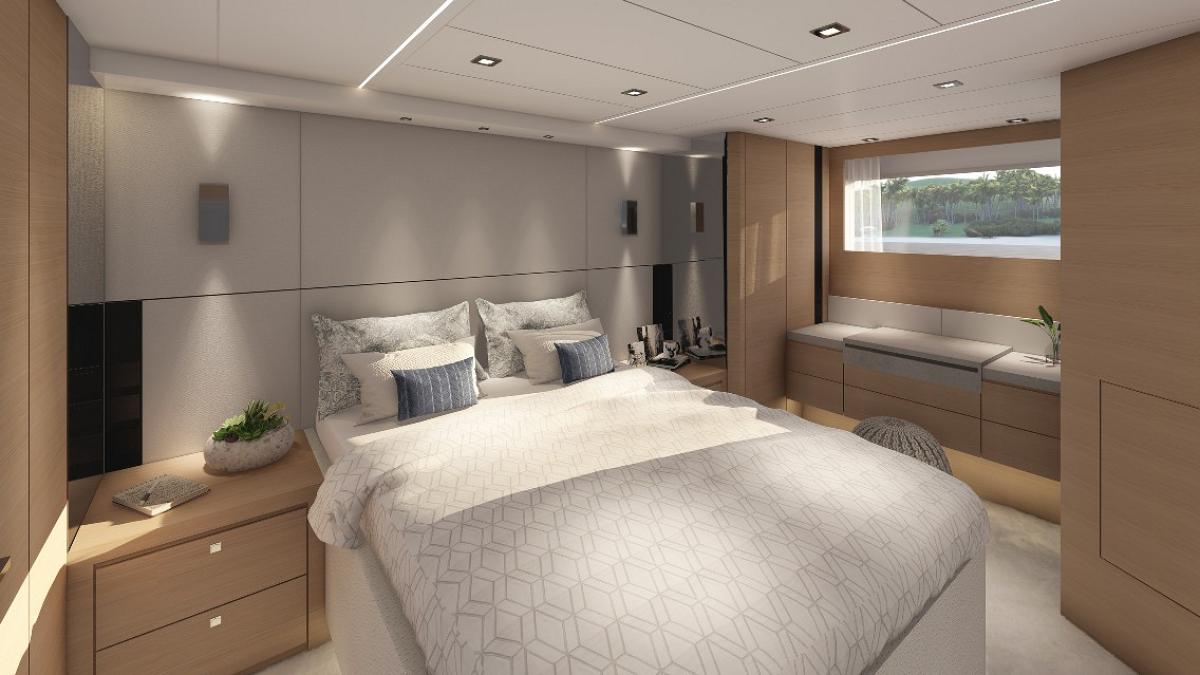 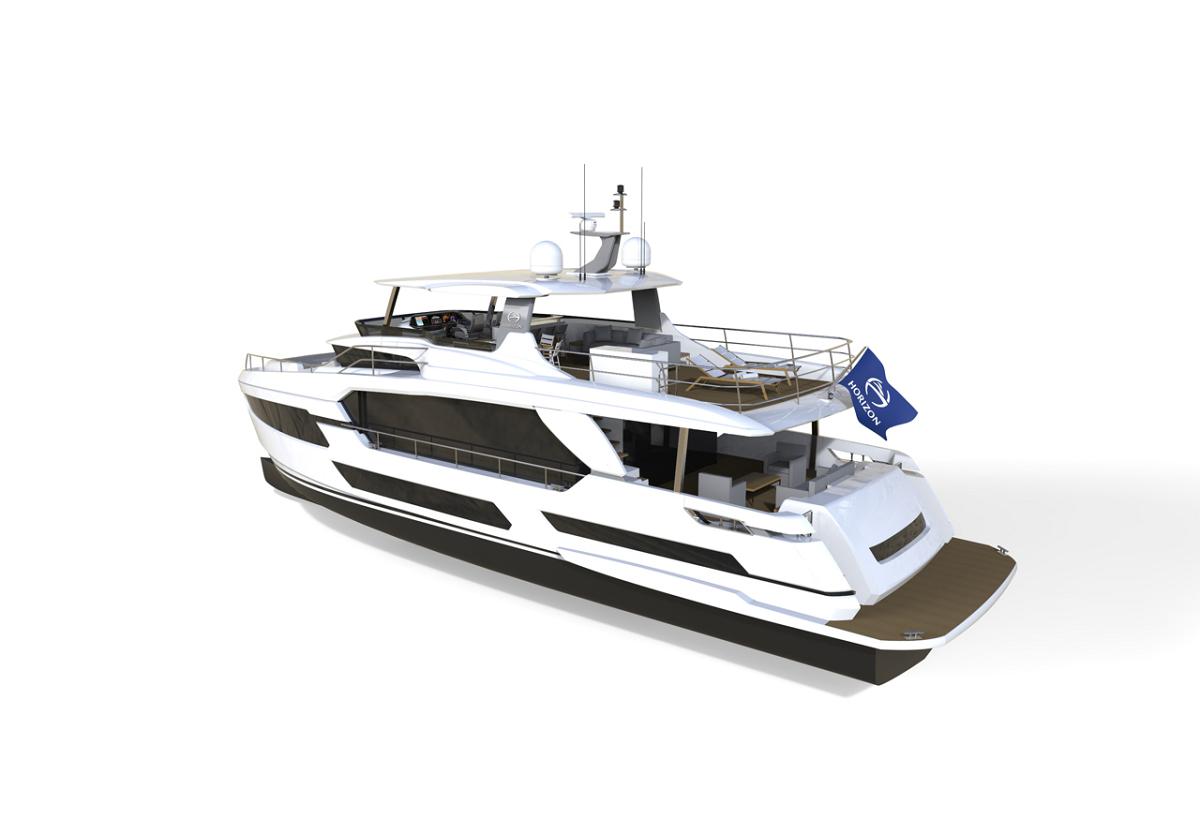 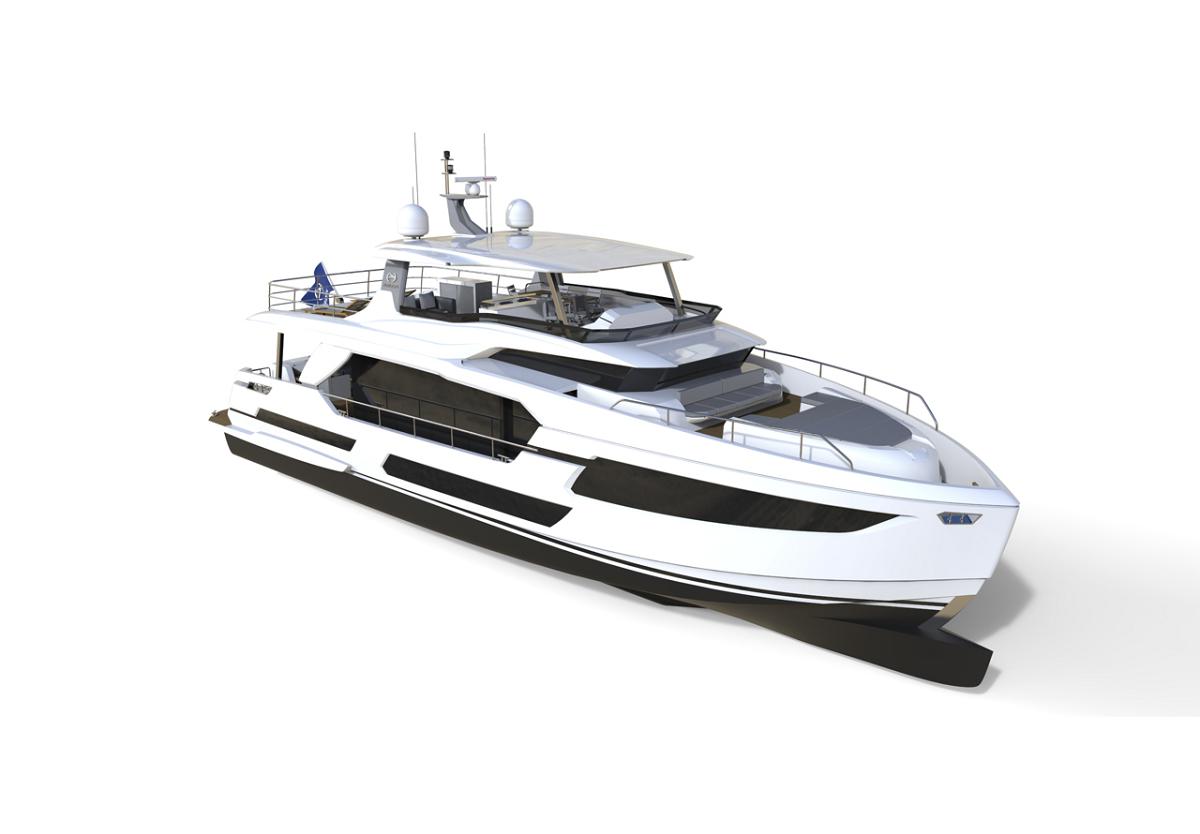 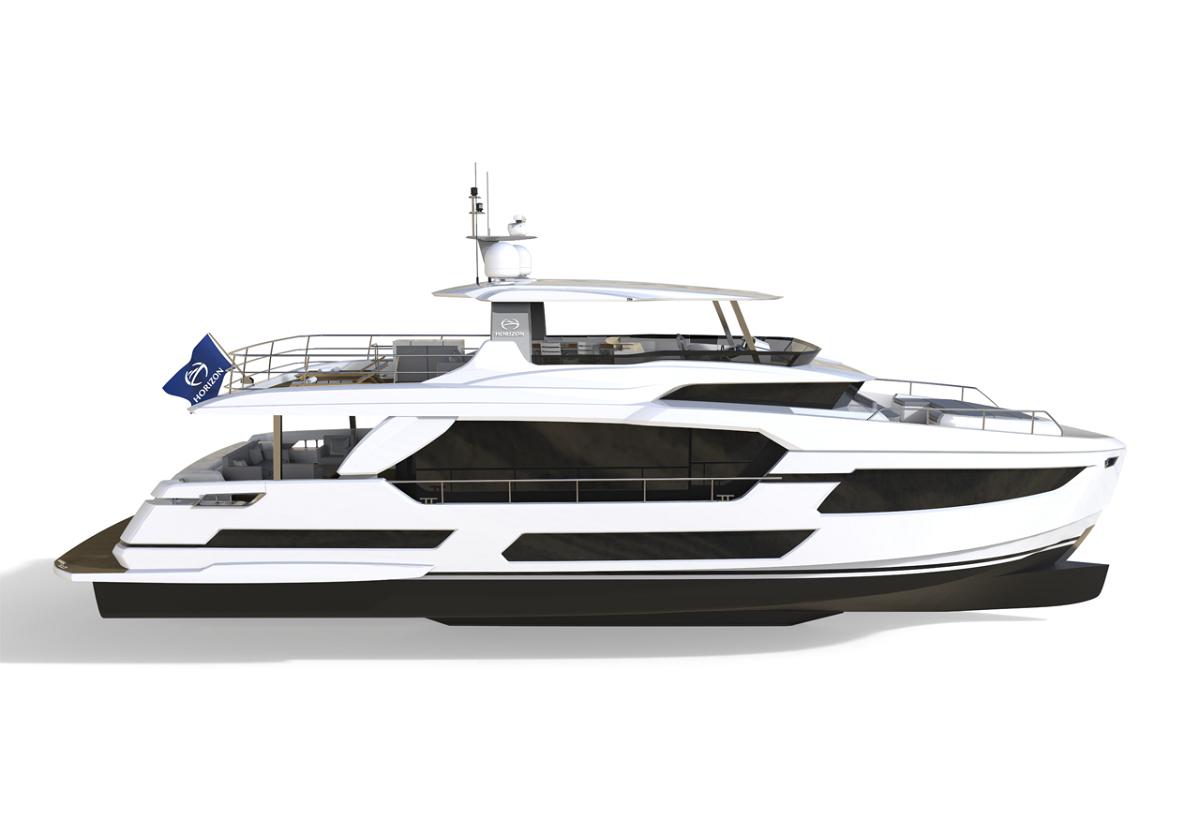 Just six short months after unveiling the brand new FD77 motor yacht, which debuted at the Palm Beach Boat Show, Horizon is proud to announce yet another addition to its next-generation Fast Displacement Series. At 70 feet LOA, the new FD70 is positioned as the entry-level yacht in the voluminous series, which now spans to 125 feet in length.

Taking its place at the entrance of the Cor D. Rover-designed series known for its unparalleled volume, innovative functionality and intelligent layout, the FD70 is itself a remarkable achievement in terms of design and naval architecture. Intended for owner/operators, the FD70 features a raised pilothouse design that accommodates both an open bridge and a lower helm area. Uniquely, the FD70 is a four-stateroom yacht, which includes a full-beam, on-deck master stateroom fitted with an en suite and walk-in closets, and three spacious staterooms comprised of a queen, double and twin on the lower deck. Accommodations for two crew members are found aft, and a beach club is optional.

As with each Horizon model, a variety of well-planned layout options are offered with the FD70, as is the ability to customize to suit one’s onboard lifestyle. To satisfy Horizon’s international reach, owners are given a variety of choices, including the option to situate the galley and formal dining area aft on the main deck, or eschew the fixed formal dining option in favor of a convertible dining table that further maximizes space.

Horizon’s Fast Displacement series has been extremely successful since it was first unveiled at the Taiwan International Boat Show in 2016. The striking exterior profile showcases large sections of glass and expansive deck areas while a wide beam and innovative High Performance Piercing Bow design and hull form accommodate unparalleled volume within. The FD Series has seen impressive sales in the three years since it was first introduced, with 25 FD series yachts in production for the U.S., Europe and Asia.

“The phenomenal success of the FD Series led to many clients asking us if we could create something that offered the same amenities, space and performance as the larger FD yachts but in a smaller footprint to accommodate a 68- to 70ft berth and easy owner operation,” said company CEO John Lu. “It was a challenging brief, but not impossible!”

To achieve a four-stateroom layout with a full-beam, on-deck master and maintain the volume and innovative features that define the FD Series required thoughtful consideration on the part of Cor D. Rover and Horizon’s R&D and naval architecture teams. The biggest challenge the team faced was balancing the shorter length with the signature FD Series styling and spacious interior. “Traditional yacht design would not enable to incorporation of this layout and features in an under-80ft yacht,” says designer Cor D. Rover. “But the team at Horizon excels at thinking outside of the proverbial box and we were able to carefully accommodate all of the desired features. This is just another example of Horizon’s willingness to be innovative and push the envelope.”

The introduction of the new FD70 marks an exciting moment for Horizon, as it expands the series to include a very popular size range for Horizon clients. The brand new FD70 is currently in the tooling phase with the first two hulls specified for the European and American markets, respectively. Hull One is expected to make its world debut at the 2020 Horizon Open House in Kaohsiung, Taiwan in January.

ABOUT THE FD SERIES:
Introduced to the world market in 2016, the Horizon Fast Displacement (FD) Series has taken the yachting industry by storm, noted for its striking style, appreciated for its well-planned layout, and praised for its exceptional stability and performance. Designed in collaboration with Cor D. Rover, the FD Series includes the FD70, FD77, FD85, FD87 and FD102 models, with plans for an FD125 underway. Each model offers multiple layout configurations and can be customized to owner preference. 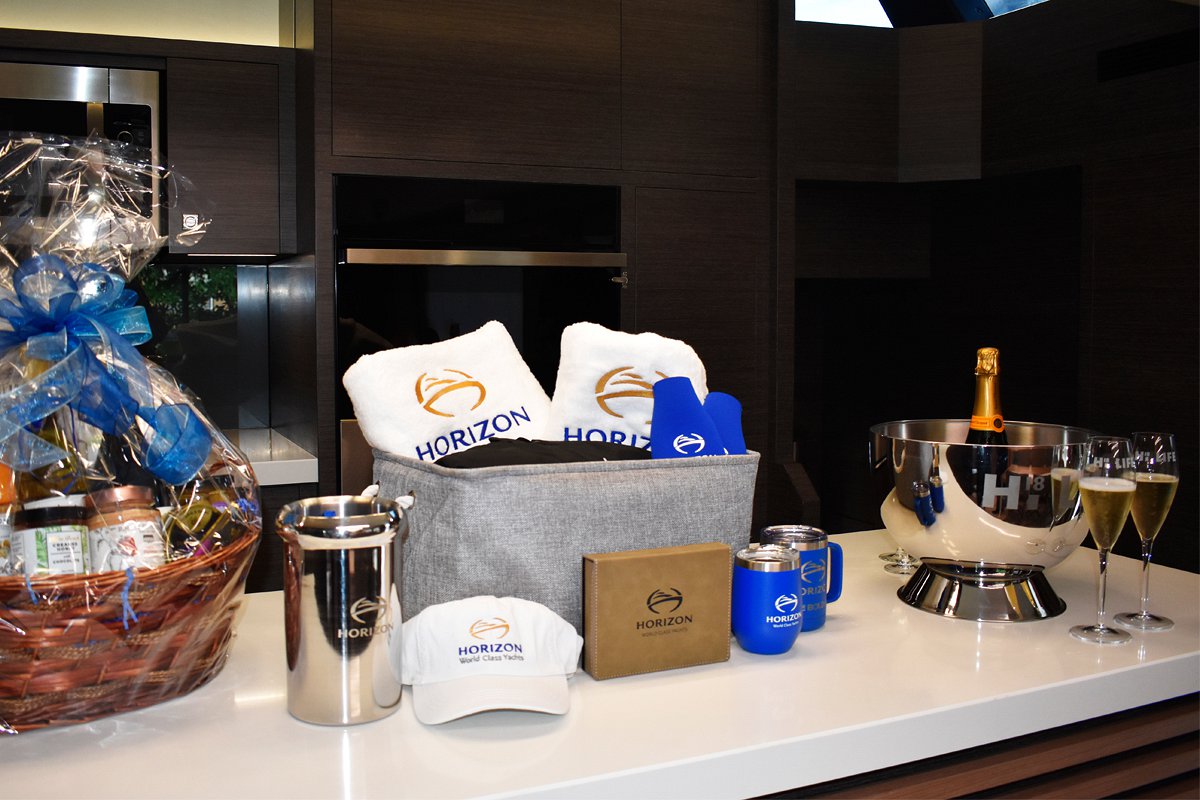 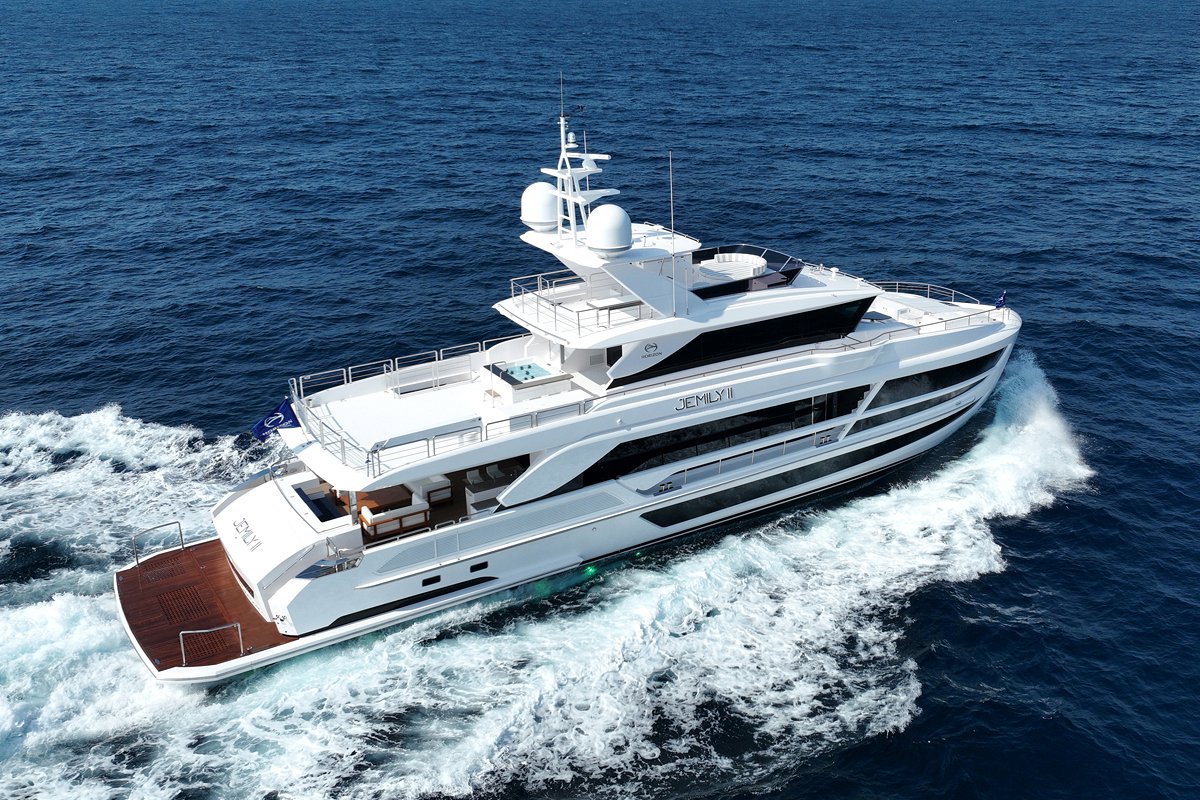 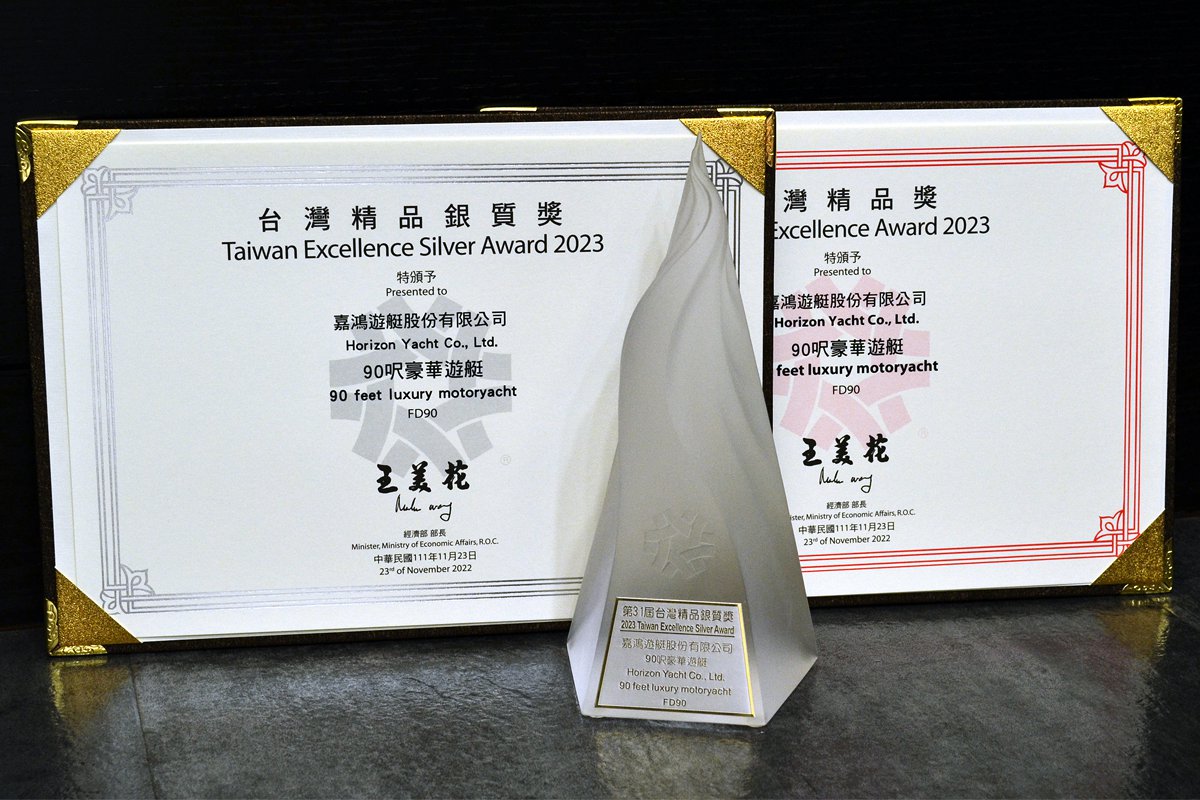 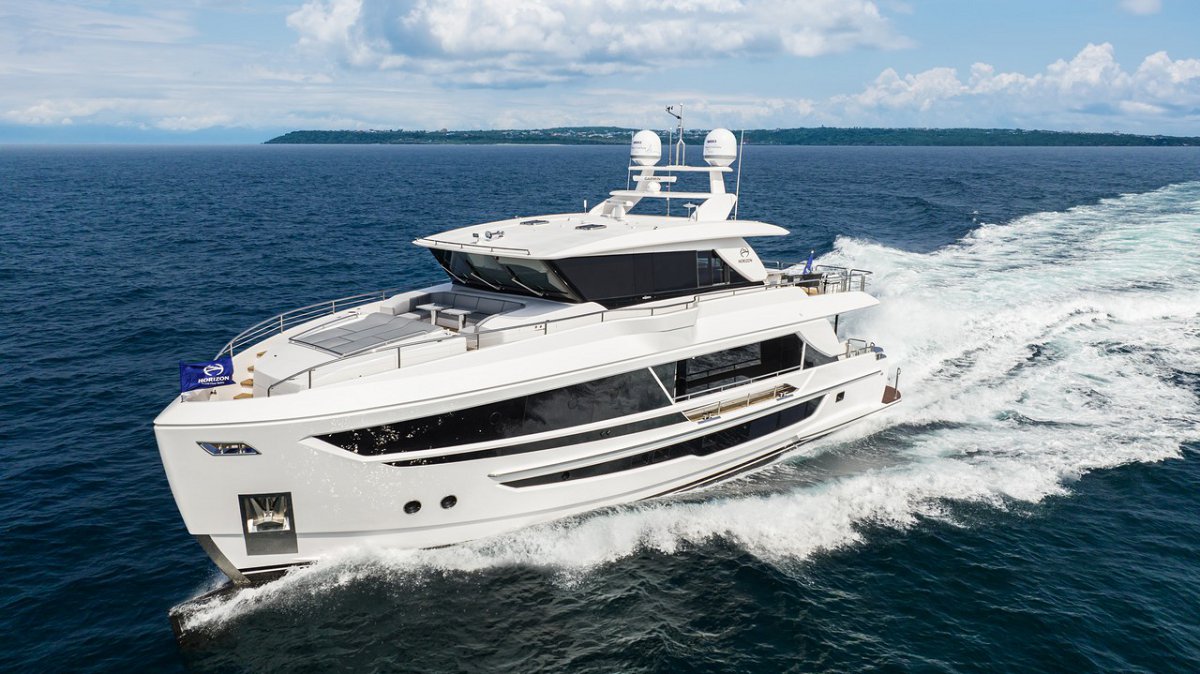