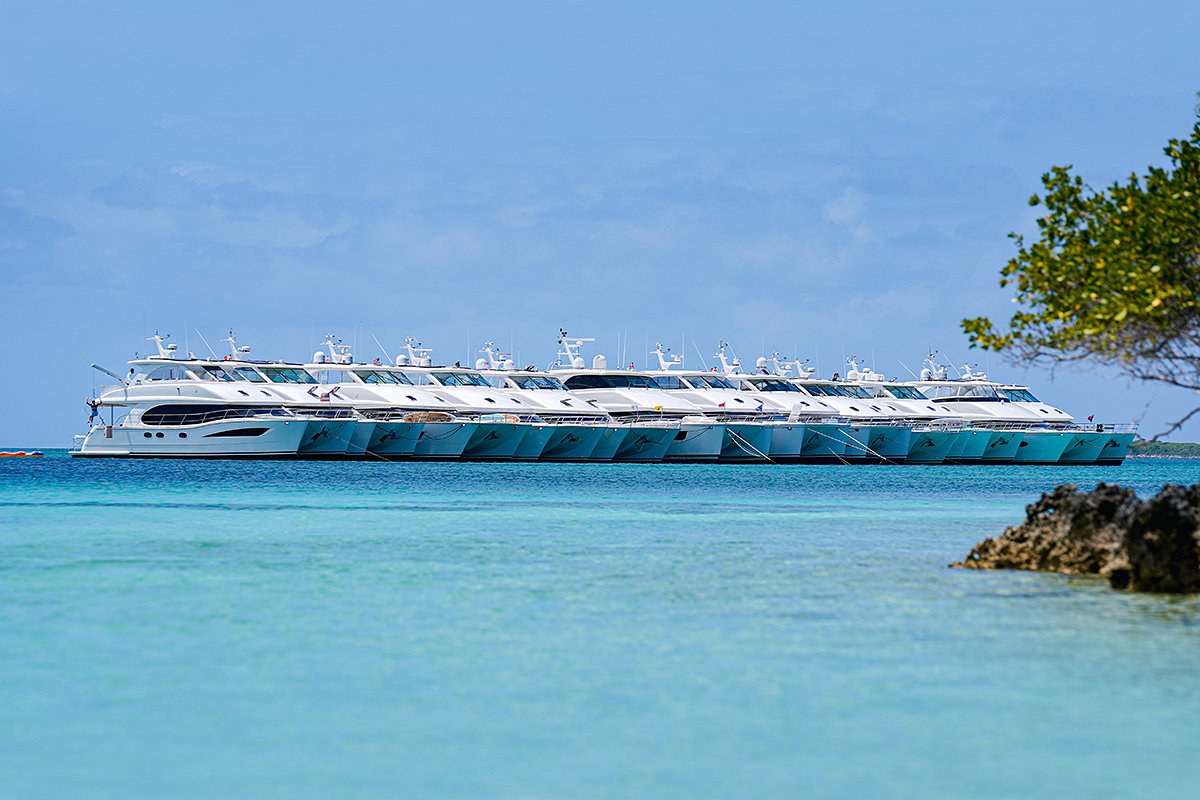 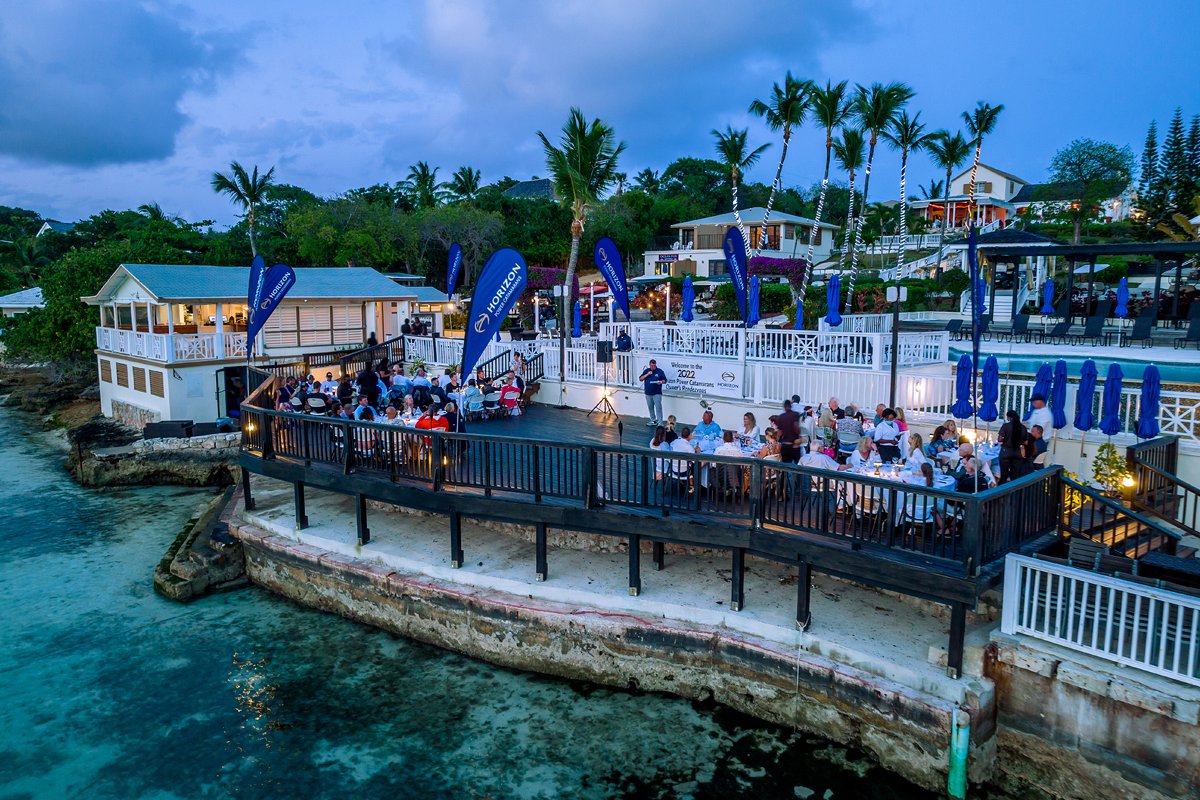 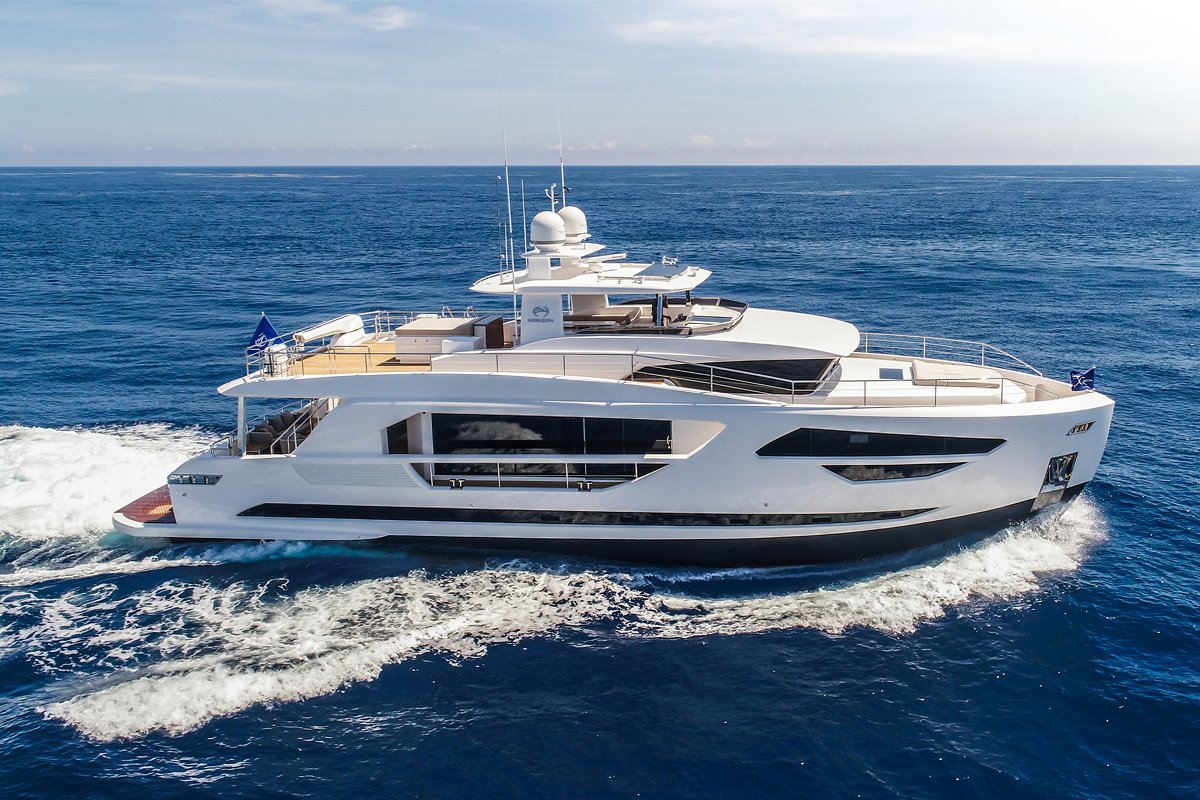 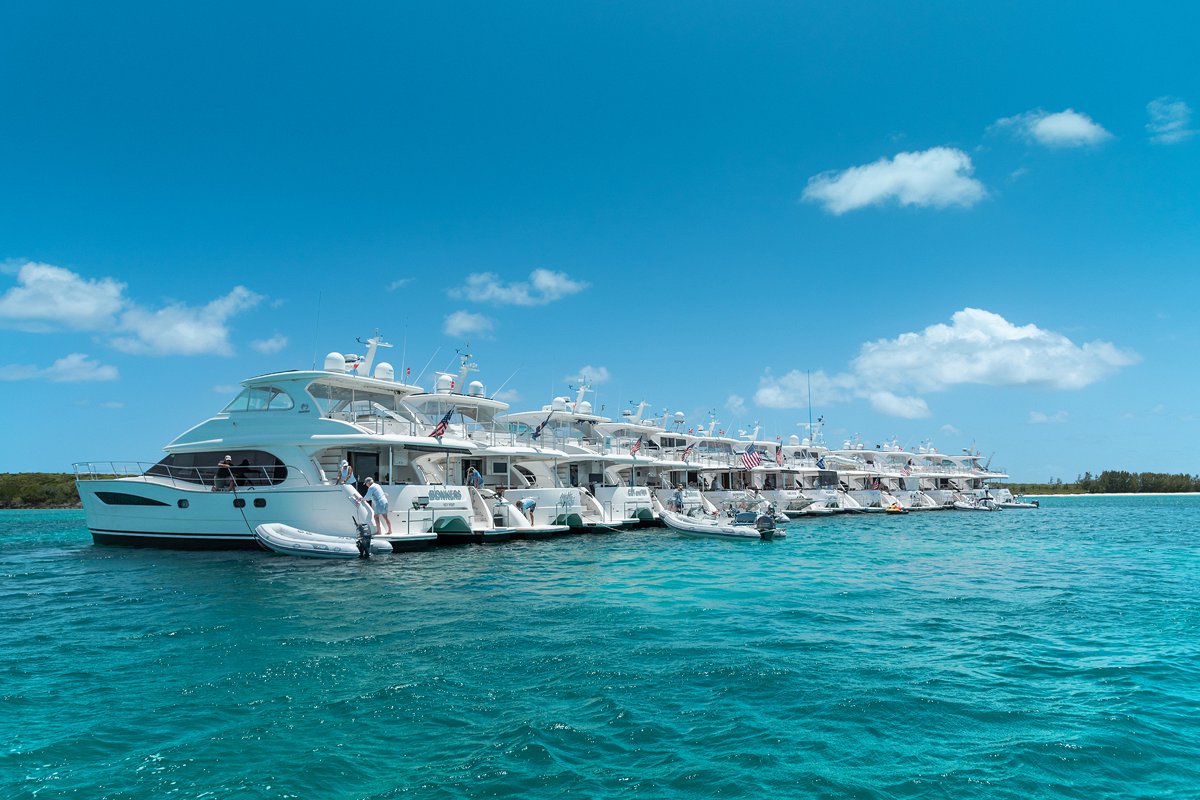 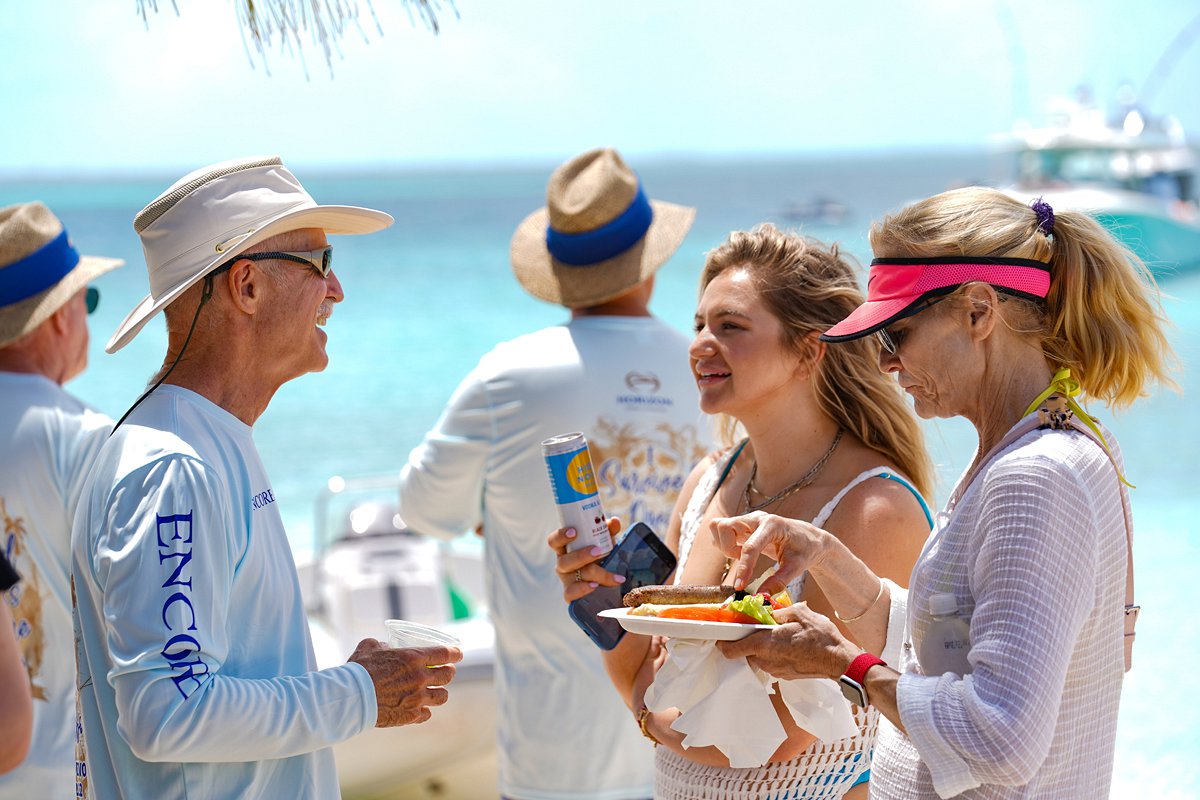 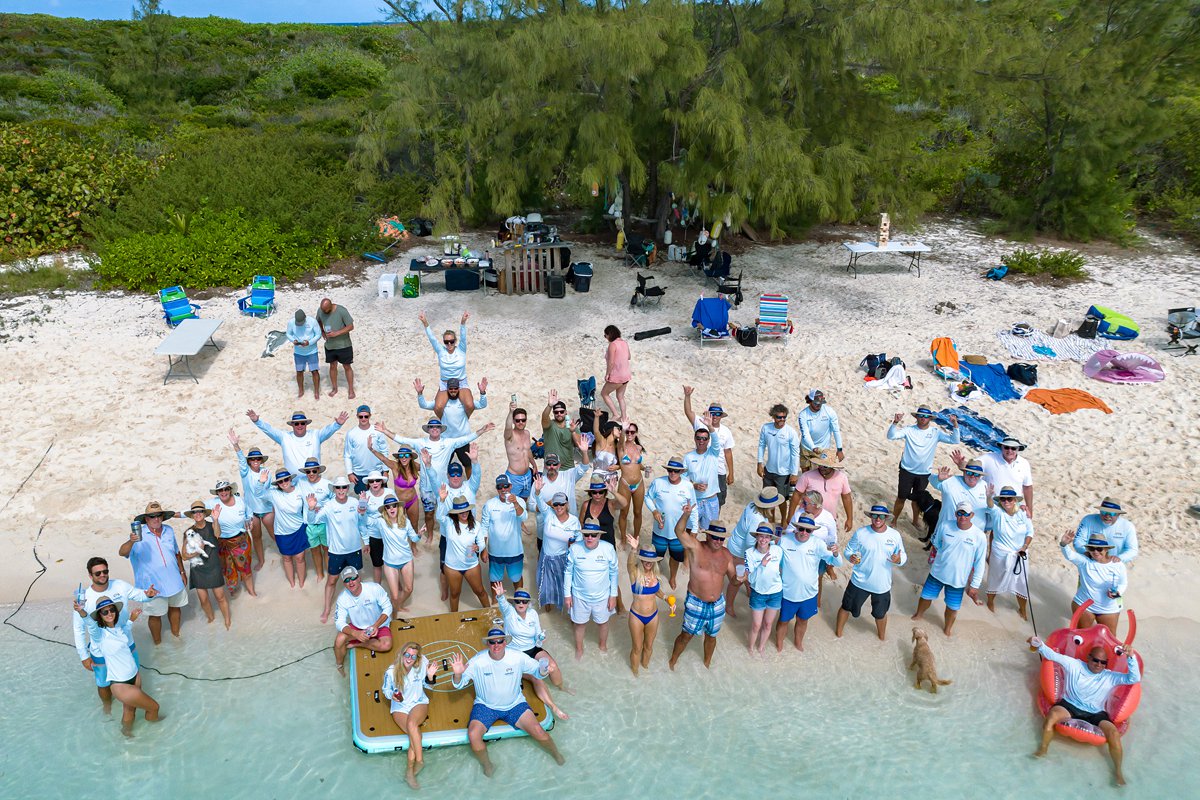 Thirteen Horizon Power Catamarans with their owners and guests gathered for a five-day celebration in Harbour Island, Bahamas 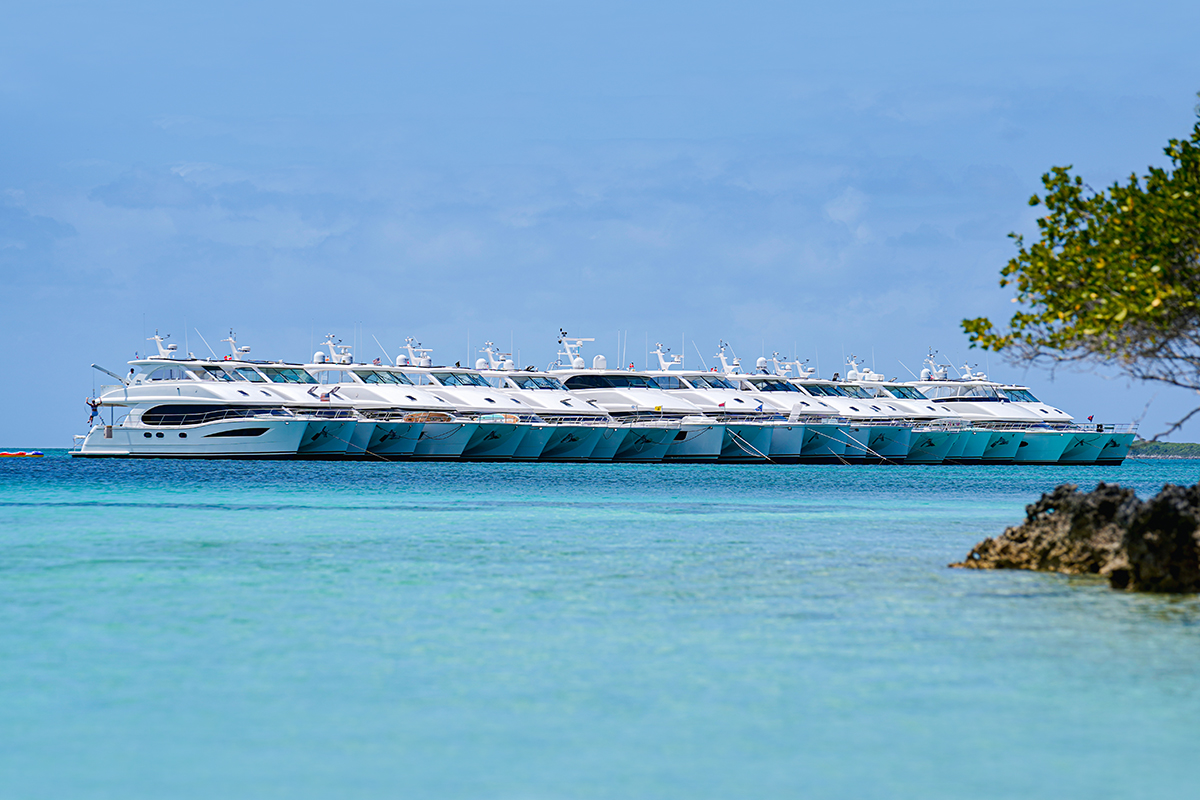 It was blowing a gale the day the Horizon PowerCats navigated “The Devil’s Backbone” and arrived on North Eleuthera, but, once comfortably nestled into their slips at the Romora Bay Resort and Marina on Harbour Island, the 13 beautiful catamarans in attendance paid no notice, their owners and guests immediately taking to the docks to mix and mingle with friends old and new.

After a three-year hiatus, the 2022 Horizon Power Catamarans (HPC) Owners’ Rendezvous unofficially kicked off on the Wednesday evening with the celebratory christening of a brand new PC65, Hideout. Attendees gathered on the dock for a champagne toast to the owners, who had moved up from their Horizon PC60 to this new build, for which they specified a Sea Torque Boss shaft system and VEEM propellers to achieve a top-end speed of 27.4 knots on their new yacht. Guests enjoyed the signature fresh stone crab, champagne and Taiwan beer during the christening and continued the merriment with a shared potluck dinner on the dock well into the evening. 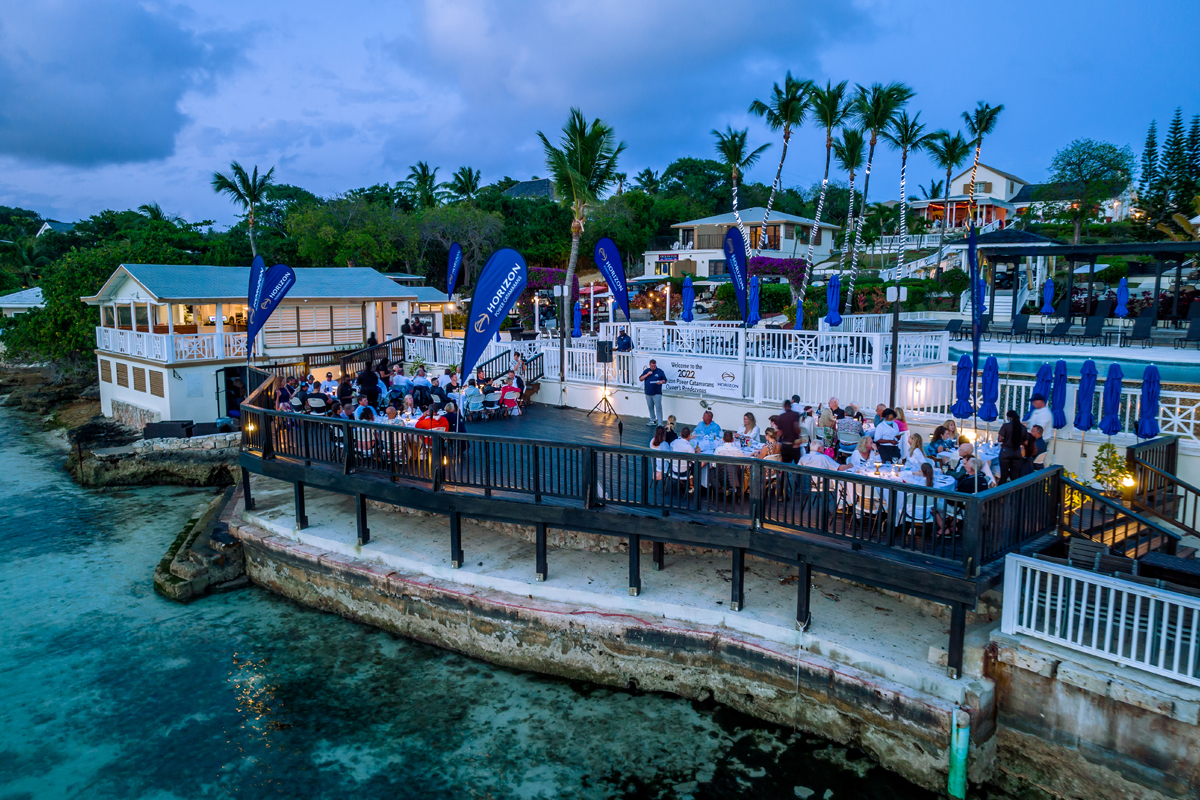 The first official day of the HPC Owners’ Rendezvous dawned bright and beautiful as the catamarans were cleaned and prepared for their Rendezvous appearance. The Horizon PowerCat team spent this time greeting each boat and checking on any service or maintenance needs - one of the many examples of the attention to service and detail that distinguishes the HPC brand from its competition. In the afternoon, the Romora Bay Resort extended a gracious welcome to the Horizon attendees with a steel drum band and Bahamian conch fritters washed down with tropical Goombay Smashes at the dockmaster’s office. Well rested and ready to celebrate, the guests donned their tropical attire for the opening cocktail party and Welcome Dinner on the resort’s terrace, for which The Power Catamaran Company founder and CEO Richard Ford set the tone for fun with his pre-dinner welcome speech. Sponsored by AssuredPartners, the evening continued well past dessert with live music and dancing.

The seriousness of the occasion was palpable early on Day Two, as owners and guests bustled about the docks carrying bags and boxes and scurried to and from their golf carts huddled in whispered conversations. It was the day of the Pimp My Golf Cart Contest and worldwide recognition as well as bragging rights for at least twelve months were on the line. Led by Spencer Lloyd of AssuredPartners, the team of judges carefully critiqued each golf cart entry, paying particular attention to the award-winning characteristics of uniqueness, fun and creativity. Creativity, fun and uniqueness were indeed the words of the day as each cart - decked out in full regalia - lined up for a fast and furious scavenger hunt around the island. The raucous parade - ranging from astronauts to aliens, lifeguards to lobsters, mermaids to dinosaurs, and pimps to parrotheads - created quite a stir as each cart and its colorful occupants rampaged through Dunmore Town completing tasks and competitions in as civilized a manner possible. Back at the resort, the frivolity continued late into the afternoon with an impromptu pool party before the guests retired to their yachts for a quiet evening.

Laughter echoed off the docks early the morning of Day Three, as owners gathered on their neighbor’s aft deck to sip coffee and recount stories of the previous day before tending to the preparations for the raft-up and beach barbecue. Despite the blue skies and brilliant sunshine, the aforementioned winds had forced a change of venue for the last two days of the Rendezvous, however the change was to no one’s disappointment as the revised venue was just as spectacular as the original. By mid-morning, each catamaran left its slip and cruised the few miles to the beach at Man Island.

Here the spectacular orchestration of the annual raft-up was on full display and managed by the Horizon Power Catamaran team with excellent precision, as Richard Ford greeted and boarded each PowerCat as it arrived and seamlessly helmed it into position as the crew set the anchor and adjusted the fenders. Within just one hour, all thirteen yachts were beautifully lined up and the guests tendered ashore for an afternoon barbecue of burgers, South African sausages, and plenty of beer, rose and champagne for all. After lunch, it was time for the cocktail competition for which three self-proclaimed experts in the field visited every yacht for a formal presentation and tasting of that yacht’s signature cocktail. Music and conversation continued as guests mingled from yacht to yacht and savored the waning sunshine before each PowerCat broke away from the raft up and set anchor for the night. That evening, a brilliant beach bonfire inspired dancing under the blanket of stars well into the wee hours. 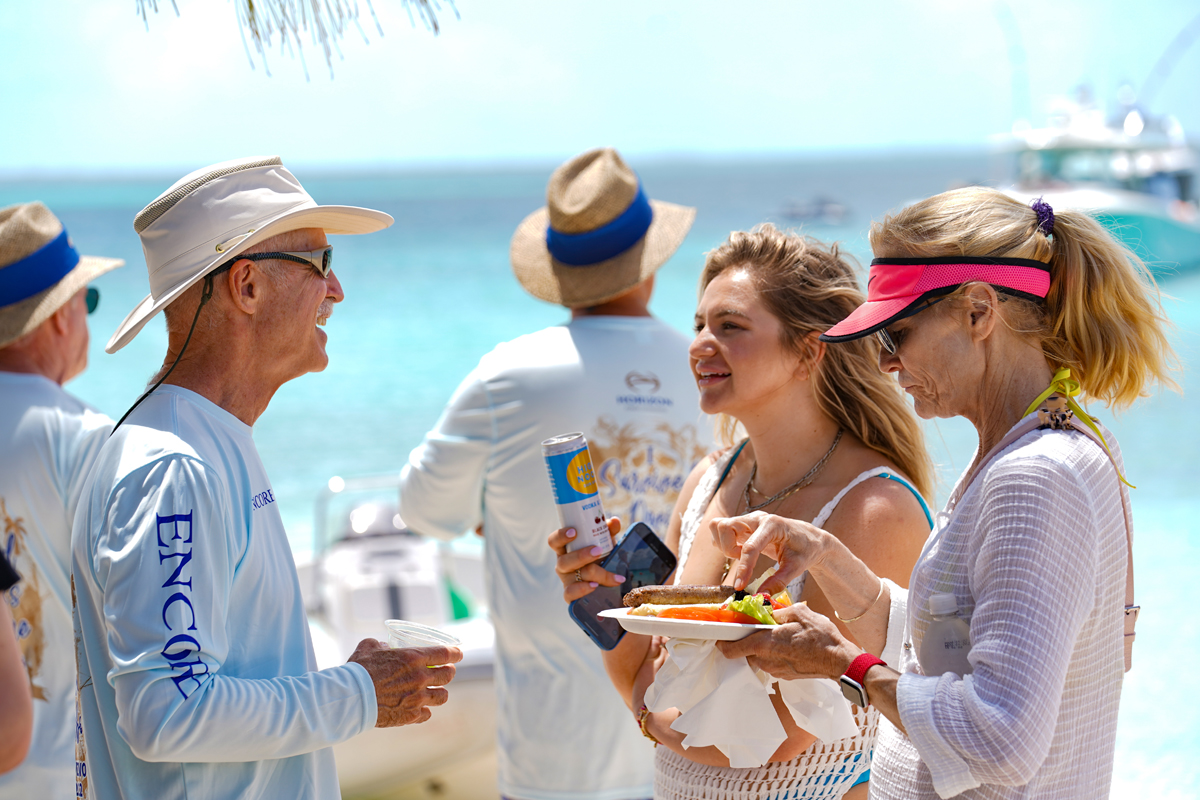 The sun rose quietly on Day Four and the peacefulness of waking in a beautiful anchorage inspired a morning swim followed by a hearty breakfast. Guests took to the water on this day, some taking part in the official fishing tournament and others spending the day swimming, snorkeling and sunbathing before heading back to their berth at Romora Bay. Once the day’s catch was recorded, everyone relaxed before gathering on the resort’s terrace for wine and cocktails and a slideshow of photos and videos captured during the previous days. The highly anticipated awards ceremony prefaced the dinner with the Horizon PC52 My Best Life taking home both the largest and the heaviest fish trophies as well as the Most Unique golf cart award for its Jurassic Park themed cart. The PC65 Cell Fish won the Most Creative category for its Under the Sea-themed golf cart and the PC60 Brokedown Palace won the Funniest golf cart award for its Pimp Palace themed cart. As for the cocktail competition, the sobered judges presented the two cocktail awards - both of which coincidentally were margaritas - to the PC60 Vitality for Taste and to the PC60 Mangata for Presentation. The PC52 Cut and Run won the Scavenger Hunt, and after dinner nobody, including the HPC team itself, was spared from the blooper-specific “C’mon Man” awards! 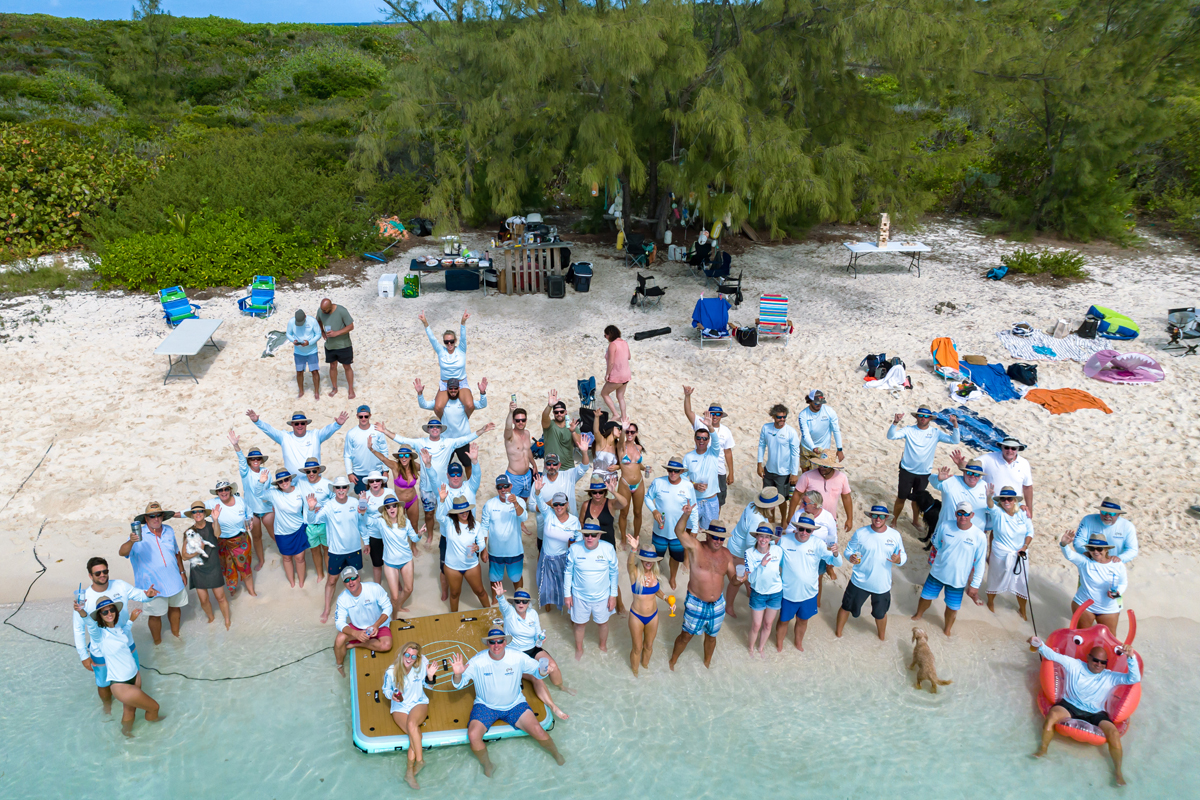 “The 2022 Horizon Power Catamarans Owners’ Rendezvous brought together a group of fantastic owners for four days of fun, relaxation and enjoyment of life’s simple pleasures, which is what being a Horizon PowerCat owner is all about,” says The Power Catamaran Company CEO Richard Ford. “Despite the weather forcing us to abandon our original plans to cruise the Devil’s Backbone and spend the last two days in Spanish Wells, all of our owners and guests were content to relax and enjoy each other’s company no matter where they were. We thoroughly enjoyed hosting this amazing event for our owners and their guests and look forward to next year!” 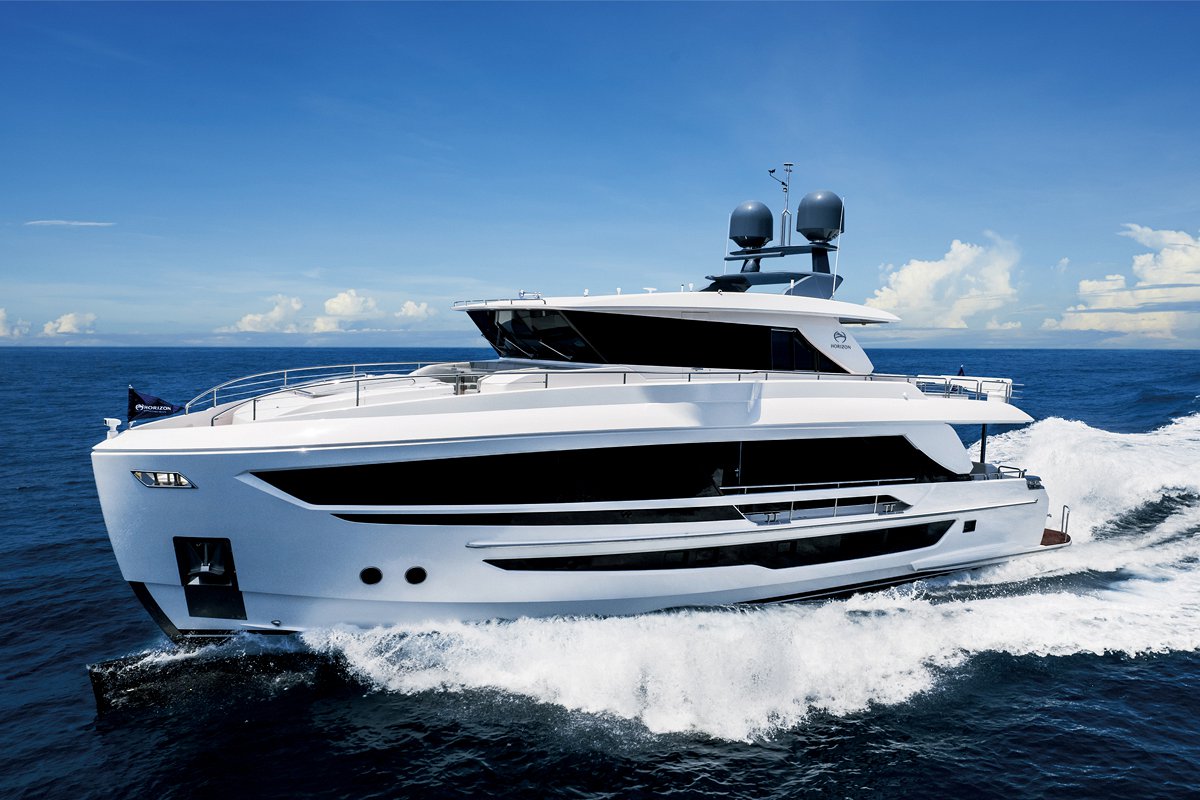 A NEW HORIZON FD80 HAS DEBUTED 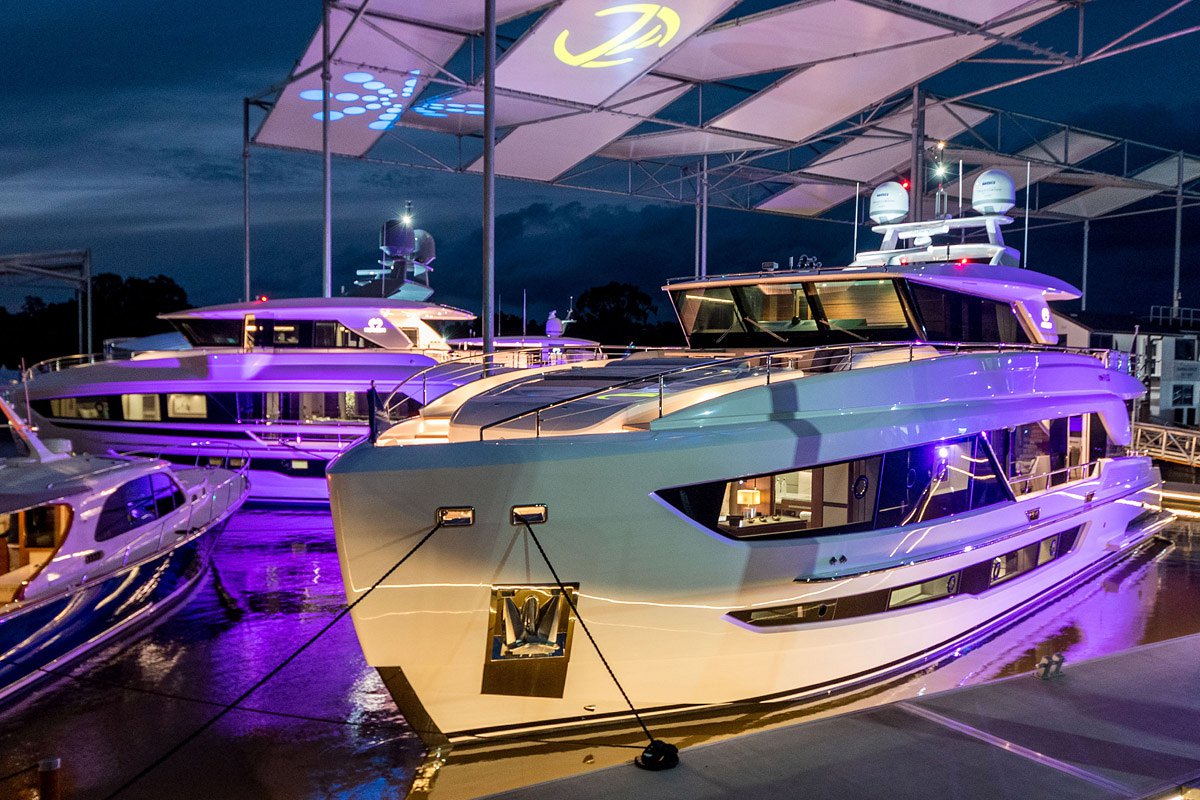 HORIZON YACHT AUSTRALIA SOLIDIFIES ITS PRESENCE IN THE AUSTRALIAN MARKET